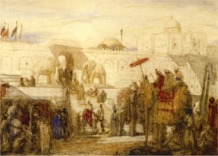 The recent revival of interest in Orientalism has led to the rediscovery of the Dutch artist Marius Bauer (1867-1932). Bauer was an inveterate traveller, going off to India, Indonesia, Turkey, Palestine and Morocco among other destinations. In 1888 he was given the opportunity to make his first trip east, to Istanbul, by the art dealer E.J. van Wisselingh. He returned with more than 100 drawings and several full sketchbooks. This pattern repeated itself again and again.

Among the cities he visited were Cairo, Luxor, Jerusalem, Agra and Benares. He was irresistibly drawn to street life, the colorful populace and the exotic landscape of parts of the world that were then unfamiliar to most people. There Bauer found inspiration for spacious landscapes and picturesque city scenes. In addition to drawings, he also made etchings, aquarelles and paintings. This exhibition will show much new work that has come to light in the recently initiated oeuvre project of the Bauer Documentation Foundation.