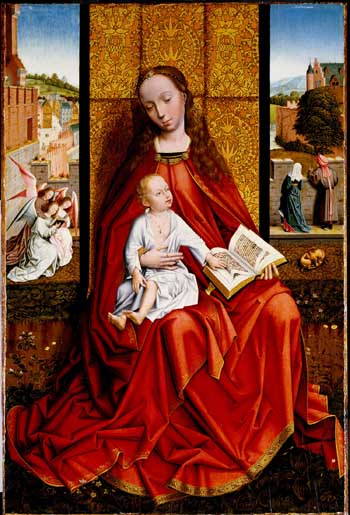 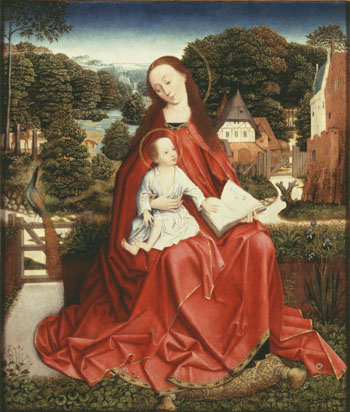 Left: The Virgin and Child Enthroned, c. 1500, by the Master of the Embroidered Foliage.
Sterling and Francine Clark Art Institute, Williamstown, Massachusetts. Gift of Governor Lehman’s Estate and the Edith and Herbert Lehman Foundation.

Right: Center panel of Triptych of the Virgin and Child Surrounded by Angel Musicians, c. 1500, by the Master of the Embroidered Foliage.
Musée des Beaux Arts, Lille.

The exhibition has been organized by the Musée des Beaux-Arts, Lille, and the Sterling and Francine Clark Art Institute in association with the Minneapolis Institute of Arts, under the auspices of FRAME (French Regional and American Museum Exchange).

Richly colored, highly detailed paintings by a mysterious 15th-century Netherlandish master are the focus of an exhibition opening at the Sterling and Francine Clark Art Institute in Williamstown, Massachusetts, on October 9, 2004. Medieval Mystery: Who is the Master of the Embroidered Foliage? will bring together a group of related paintings believed to be by an artist known only as the Master of the Embroidered Foliage. With loans from museums in France, Belgium, and the United States, the exhibition marks the first time these works, which all depict a nearly identical image of the Madonna and Child against different settings, have been examined as a group.

“This exhibition is a detective story about some great works of art, bringing to light new information about this artist—if it is one artist,” said Michael Conforti, director of the Clark Art Institute. “We know that our visitors will enjoy the beauty and richness of these paintings. At the same time we hope they will explore the scientific and technical analyses that help us understand how they were painted and who painted them, and be intrigued and enlightened by the questions the exhibition raises.”

The inspiration for the exhibition is the 15th-century oil on panel, The Virgin and Child Enthroned, from the Clark’s collection. The painting was part of a major gift from the estate of New York Governor Herbert Lehman and the Edith and Herbert Lehman Foundation in 1968. The gift, which included other early Netherlandish and Italian Renaissance paintings, is one of several important collections acquired by the Clark over the decades, building on the strength of the original collection of founders Sterling and Francine Clark. The Clark’s painting will be joined by Virgin and Child in a Landscape from the Minneapolis Institute of Arts, Triptych of the Virgin and Child Surrounded by Angel Musicians from the Musée des Beaux-Arts, Lille, and Virgin and Child Crowned by Two Angels from the Groeningemuseum in Bruges, Belgium. Rare illuminated books from the Chapin Library of Rare Books and a medieval textile will also be on view.

The Master of the Embroidered Foliage is the name given to a painter active in the southern Netherlands from around 1495 to 1500. The late art historian Max Friedländer chose the name because of the artist’s meticulous technique in painting foliage, with small, raised marks that resemble embroidery stitches. While the show will explore the possible identity of the Master of the Embroidered Foliage himself, it will also question whether all four paintings are indeed by the same artist.

The installation will include a “questions room” where various theories and problems will be presented along with scientific analysis and conservation information that reveals new information about the paintings. Visitors will be encouraged to closely examine the paintings and think about these questions for themselves. Throughout the show, curators, conservators, and art historians from the Clark and other institutions around the world, as well as visiting scholars participating in the Clark’s renowned Research and Academic Program, will gather to view the exhibition and discuss its themes. In order to take advantage of what is learned throughout the exhibition, a catalogue will be published at end of the show’s tour in 2005 in Lille.

“Part of the intrigue of this exhibition is that many of the answers won’t come until the show is on view, so the public is integral to this process,” said Richard Rand, senior curator at the Clark. “It is only by looking at these four paintings together, and by bringing other experts and scholars in, that we will begin to learn more. As the first venue, the Clark will function as a greenhouse for ideas that will grow into more fully formed theories as the exhibition continues.”

The Clark painting depicts Mary, dressed in red robes, seated in front of a tapestry with the Christ child on her lap, leafing through the pages of a large book. On either side of the tapestry, a cityscape background includes finely executed details, such as a trio of angels, a man and a woman peering over a wall, and a sleeping dog. The central figures of all four paintings are virtually identical; however, the backgrounds, settings, and decorative details vary greatly from painting to painting. The possible meaning of each painting changes as the details change. Medieval audiences would have been familiar with the symbolic meanings, such as the practical healing qualities of the flowers and plants in the paintings. To illuminate this for today’s viewers, the exhibition will include a range of information about symbols and iconography.

The Clark will also feature a related exhibition, Albrecht Dürer: Life of the Virgin, during the showing of Medieval Mystery. Drawing from the Clark’s exceptional collection that includes a virtually complete representation of Dürer’s prints, the exhibition will feature the great German artist’s 1511 woodcut series, Life of the Virgin.