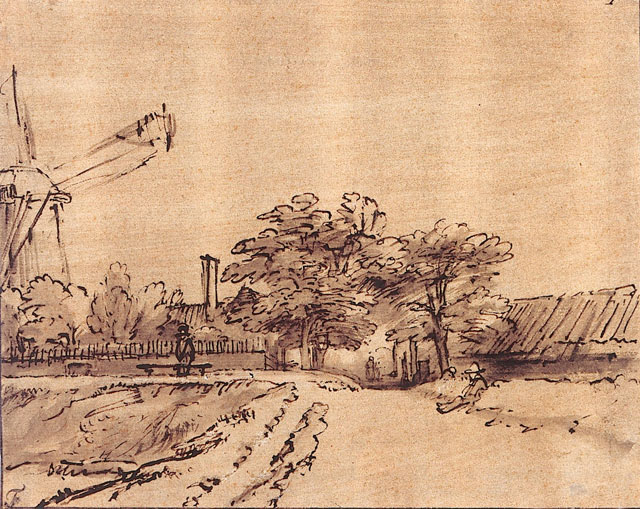 Rembrandt, The windmill on the bulwark of the Sint Anthonispoort,
Amsterdam, ca. 1650
Private collection

Holland with its polder mills, watermills and windmills counts as a typical “mill country”. Thanks to the windmill our “country by the sea” has grown. Six hundred years ago the first polder mill was built in the Netherlands. For this reason, 2007 was declared “Year of the Mill”, with the intention of stimulating the public and political interest in mills.

Famous master painters from the Golden Age, among others Rembrandt (himself the son of a miller), have painted and drawn mills. During the age of Romanticism mills were seen more than ever as a typically Dutch phenomenon. In these years of industrialisation and modernisation, the artists were foreseeing the decline of the craft of the miller and of the windmill itself. In their painting they hold on to this picturesque past. “Masters and Mills, from Rembrandt to Mondriaan” offers an overview of the image of the mill in Dutch art through the ages.