With the exhibition Meeting Barthold Suermondt. A New Taste for the Arts that opens its doors on March 8, parallel to TEFAF, the Aachen museum celebrates the 200th birthday of its founder, the Utrecht-born industrialist Barthold Suermondt. During the third quarter of the 19th Century Suermondt would become one of the leading art collectors in Europe. He bought at auctions and from other private collectors and assembled an impressive collection of primarily Dutch paintings and drawings of the Golden Age, but early Netherlandish, Renaissance German and 17th Century Flemish and Spanish art as well. His advisors were the most prominent art historians of his time, such as Gustav Friedrich Waagen, who wrote Suermondt’s first catalogue in 1859, Théophile Thoré, alias W. Bürger, the first connoisseur of Dutch and Flemish art and the man who rediscovered Frans Hals and Vermeer internationally, and who would remain at Suermondt’s side until he died in 1869. Carel Vosmaer, Alfred Woltmann and of course Wilhelm Bode were fervent admirers of Barthold Suermondt and supported him shaping a superb art collection, ranging from Jan van Eyck to Watteau and with spectacular paintings by Rembrandt, Rubens, Vermeer, Ruisdael, Velazquez, Van Dyck, Van Goyen and especially Frans Hals, of whom Suermondt owned no less than five pictures, including highlights like the Singing boy with a flute, Malle Babbe  and Catharina Hooft and her wet-nurse. The rediscovery of Frans Hals, in which Suermondt, Thoré-Bürger and Bode all took part in their own way, resulted in an exploding market. Suermondt bought the Singing boy with a flute at an Amsterdam sale in 1856, at a time Hals was virtually unknown. The 61 guilders Suermondt paid for the picture, were peanuts compared with what he had to pay 11 years later for the Malle Babbe (1600 Guilders) or – another five years later – the Catharina Hooft (4500 Guilders). 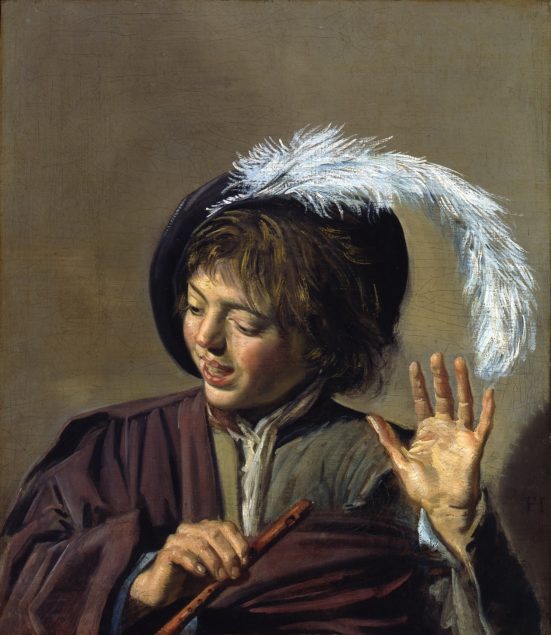 He was less successful with Vermeer, although he did get one original, the Young woman with the pearl necklace. During the years 1866-1869 a remarkable Vermeer mania took place, centering around the Paris Exposition rétrospective, the platform Thoré-Bürger used to launch Johannes Vermeer from a complete unknown to an international star, accompanied by the first catalogue raisonné of the artist. At the time Suermondt owned two paintings that were attributed to Vermeer, a Dune landscape  and the Country House and that were much in demand since they were presented in the Paris exhibition. Actually Suermondt could get 40 times the price he had paid for the landscape, but he decided against it and held on to the painting (later both pictures would be exposed as non-Vermeers, by Bode and Bredius). One year later, in 1867, Suermondt would acquire the famous Young woman with the pearl necklace, which came from Thoré-Bürger’s own collection.

In the 1860s Suermondt had become the most celebrated collector on the continent, buying in Paris, Amsterdam, Cologne, Brussels and Vienna. His most famous coup was the acquisition of 10 paintings from the Schönborn collection in Vienna for next to nothing, using the National Gallery in London as a very naïve sponsor to obtain his goal. The key was the huge Schönborn ‘Rembrandt’ with Christ blessing the Children, the eleventh picture Suermondt bought from Schönborn, but which he sold directly to William Boxall, the new director of the National Gallery, for the enormous sum of 7.000 Pound Sterling. Probably this was the price that Suermondt paid for all eleven paintings from the Schönborn collection, getting the others more or less for free. Among these 10 pictures from Vienna were absolute highlights, like the Holbein Portrait of a man from the Wedigh Family, the wonderful Cheval blanc by Adriaen van de Velde, but superb pictures by Wouwerman, Steen and Jan van Huijsum, too. According to a letter he later wrote to his friend Carel Vosmaer, Suermondt actually never believed the painting to be by Rembrandt, unlike Thoré-Bürger and Boxall. The picture is since long regarded as an important early painting by Nicolaes Maes.

In those years he developed a new interest, Early Netherlandish and German paintings, that led to the acquisition of two important pictures by Jan van Eyck, the Madonna in the Church and the famous portrait, now known as the Man with the pinks. Celebrated by Bode as Van Eyck’s most important portrait, it is now regarded as an early 16th-Century painting, done in the style of Jan van Eyck. In addition Suermondt acquired two other Holbeins, one of which would later be recognized as one of the most superb portraits of Jan Gossart. After the deaths of Waagen (1868) and Thoré-Bürger (1869), Suermondt started to focus more on drawings. He bought his first drawings in the 1850s, again primarily Dutch and Flemish drawings of the 17th Century, including Rembrandt, Rubens, Brouwer, Saenredam, Van Goyen and Ruisdael, but only in the years 1870-73 he acquired dozens at the time, especially at the sales of the Dupper- and Vis Blokhuyzen collections. 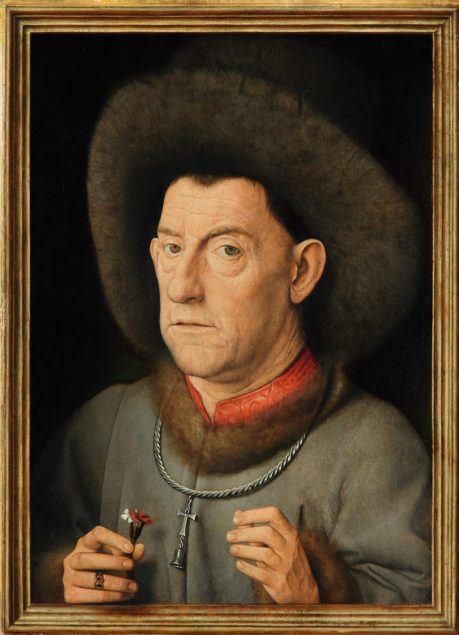 Follower of Jan van Eyck (ca.1390–1441), Portrait of a Man with carnation and the Order of Saint Anthony, ca. 1435
Gemäldegalerie, Berlin

The crisis that was caused by the so-called “Gründerkrach” effected Suermondt deeply. The family bank, led by his son Robert, was in deep water and the only way to save it, was to get his hands on at least 400.000 German Taler. He decided to sell his collection and the only serious candidate would be the Berlin Royal Picture Gallery, led by Director Julius Meyer. However, it was Bode who was the driving force in acquiring the 218 paintings and 435 drawings from the Suermondt collection, although two key pieces, Suermondt’s large Rubens and Hobbema’s River landscape, would never make it to Berlin. Suermondt had put a serious price tag on both paintings and Bode was not willing to accept that. He did not believe the Rubens to be genuine and he was of the opinion that the Hobbema Berlin already owned was very similar and certainly not of lesser quality. Suermondt would sell the Hobbema in a Paris sale in 1877, but he kept his Rubens, and in 1882 he donated the painting to the City of Aachen, together with 104 other paintings, followed later by another 70 pictures in 1883, 1884, 1885 and 1887, at his death. By that time Suermondt had become honorary citizen of the City of Aachen and a museum, housing his collection, was named after him. The Rubens is a Jan Boeckhorst, now.

The exhibition counts no less than 60 paintings an 23 drawings, largely from the Berlin collections, including Rembrandt and Rubens, Holbein and Gossart, Hals and Steen, and Ruisdael and Ostade. The exhibition is accompanied by an important catalogue, 440 pages thick, including seven essays by Peter van den Brink, Frances Suzman Jowell, Michael J. Ripps, Jaap van der Veen, Dirk Tölke, Dagmar Preising and Peter Forster, 65 catalogue entries by 40 authors and a complete overview of all the paintings that once remained in Barthold Suermondt’s famous collection, by Wibke Vera Birth, the co-curator of the exhibition.