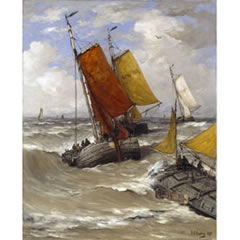 Hendrik Willem Mesdag (1831-1915) was a leading member of the Hague School and the only one of that group to specialise in painting seascapes. As part of the Mesdag Year, this exhibition at the Gemeentemuseum Den Haag focuses on the greatest ever exponent of Dutch marine painting.

Mesdag was unequalled in his ability to produce atmospheric canvases depicting changing weather conditions on the North Sea coast at Scheveningen and the various activities of the fishing community that lived there. Despite his later fame, Mesdag was initially regarded by Hague artistic circles as a well-intentioned amateur; the committee of the Pulchri Studio artists’ association was even doubtful about admitting him as a professional member.

Mesdag was not disheartened. He submitted two paintings for the Paris Salon of 1870 and astonished everyone by carrying off a gold medal for Les Brisants de la Mer du Nord (‘The Breakers of the North Sea’). Mesdag’s mind was immediately made up: he determined to become a marine painter and hired a room in Scheveningen overlooking the sea. His seascapes were soon winning acclaim from leading art critics and Mesdag came to be regarded as one of the leading artists in a new “ultra-radical” movement: the Hague School. Mesdag was also to become a leading light of Pulchri Studio. He co-founded the Hollandsche Teeken Maatschappij (‘Dutch Drawing Society’) – a special water colourists’ section within Pulchri – and in 1889 he was elected chairman of Pulchri Studio. He continued to play a prominent role in the association right through until 1907 and it was partly due to his efforts and business acumen that Pulchri was able to move to its present premises in the Lange Voorhout in the course of that period.

Mesdag was also an active collector of work by contemporary artists, purchasing paintings not only by other members of the Hague School, but also by Barbizon School artists like Millet, Rousseau and Daubigny. He also acquired several major works by Courbet. His home in The Hague (now the Mesdag Museum) was regarded as a shining example of contemporary good taste, with carpets by Colenbrander, vases from the Rozenburg pottery and a large collection of Japanese bronzes.

Mesdag is equally well-known for the largest painting he ever produced: a 1600 m² panorama, painted in 1881 and still on display in its original rotunda in the Zeestraat (The Hague). His wife, Sientje Mesdag-van Houten, and his much younger contemporaries Théophile de Bock, Breitner and Blommers helped in its creation. Mesdag himself regarded his panorama – a view from the Seinpost Dune in Scheveningen showing an immense vista of sea, beach, dunes, the fishing village of Scheveningen and the distant outline of The Hague – as his most important work. Vincent van Gogh (who attended the opening) would have heartily concurred. The same themes of the sea, the beach and the life of local fisherfolk also feature in the work of the other Hague School painters included in this presentation, such as Jozef Israëls, Albert Neuhuys, Anton Mauve, Jacob Maris and J.H. Weissenbruch. The exhibition will include not only items from the Gemeentemuseum’s own holdings, but also many works on temporary loan from a private collection.

In addition to this exhibition at the Gemeentemuseum, the wide range of events celebrating the 125th anniversary of the Panorama Mesdag will include Mesdag exhibitions at the Mesdag Panorama, Mesdag Museum and Pulchri Studio. See www.mesdag.com for the complete programme.