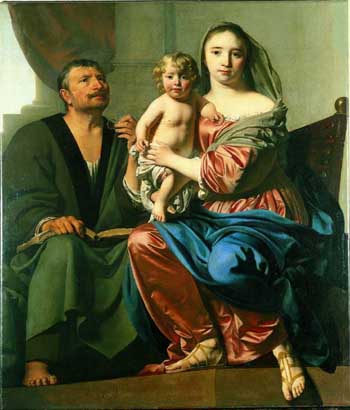 Painted with Passion: masterpieces from the Golden Age is an exhibition consisting mainly of 17th-century paintings with a religious theme. By way of prologue, the 16th-century works give a picture of a tradition out of which emerge the major 17th-century artists. The Golden Age, that great period of economic and artistic expansion from approximately 1580 to 1670, appeals to everyone’s imagination. All are familiar with the abundant still-lifes, the luxuriant landscapes, the exciting genre paintings and the imposing group portraits of archers’ guilds created by great masters, including Rembrandt and Vermeer. The works of the Dutch 17th-century painters were everywhere appreciated and praised not just in their own time but even today. Biblical themes from the Golden Age are, however, less well known – with the exception of works by Rembrandt. And thus they can be regarded as a somewhat undervalued aspect of this thriving period. The Baptism of the Eunuch by Rembrandt (1606/07-1669), The Holy Family by Cesar van Everdingen (1616/17-1678), The Crowning with Thorns by the Utrecht Caravaggist Dirck van Baburen (1594/95-1624) and The Crucifixion of Christ by Abraham Bloemaert (1566-1651) are sublime examples of religious art from this period. Together with more than 60 other paintings they throw light on this less well-known side of the Golden Age.

The exhibition presents an exceptional selection of top-class pieces from the Museum Catharijneconvent collection enriched with a number of important paintings on loan from collections at home and abroad, for example two paintings by Matthias Stom from the Museum of Fine Arts in Malta. Each one is a work of great importance. The many scenes depicting the Passion and also the way in which the scenes are created give the visitor an excellent picture of the 17th-century art of religious painting – painted with passion.