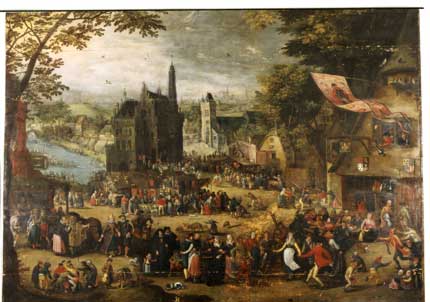 The exhibition is a presentation of the most important art works – 40 paintings of the period since the 16th until the beginning of the 20th century – originating from the collection of the Muzeum Narodowe outside its seat.

Despite its small size, the exhibition documents the collecting tradition of Szczecin and reflects the character of this port city as an artistic center. It stresses periods of the artistic splendor of Pomerania , including primarily the “Golden Age” at the turn of the 16th and 17th centuries and a period of intensive economical development in the 19th century and at the beginning of the 20th century. It also shows the specificity of the region: unions with Baltic countries and strong influences from the Netherlands.

In its current shape this collection illustrates – through the ages – the collecting traditions and changing tastes of the inhabitants of Western Pomerania . The oldest presented art works are linked with the northern European Renaissance. The recently regained portrait of Duke Phillip I, signed by Cranach’s atelier, is a leading object of this period. This image is evidence of the artistic level of the early duke’s collection; simultaneously it demonstrates specific features of Reformation art. This group also includes a portrait of Phillip Melanchton, which is especially interesting on account of combination of graphical and painting techniques.

In the second half of the 16th century, along with the increase of the significance of the Netherlands in Europe, a trend towards art works of painters of that place as well as artistic exemplars, which came from over there and disseminated in Pomerania. Among the imported group of paintings, The Great Fair painted by a creator from David Vinckboons’ circle is worth of attention. It summarizes the achievements of Dutch artists within landscape and scenic painting. In turn the Portrait of a Man with a Rose, with a Resurrection in the background, represents a local creation based on Dutch prints. The paintings of the next centuries: presentations of the sculpture and painting atelier created at the beginning of the 18th century or River Landscape and Figures of Jacob von Strij, painted almost one hundred years later, are evidence of the long-lasting trend towards Dutch art. Due to the location of Szczecin and its character, marine painting also enjoyed popularity among local receivers. Among the works on display is a Sea Storm originating from the second quarter of the 17th century.

The Szczecin collection contains few but valuable Italian paintings of the 17th century. Two paintings of the distinguished class, Return of the Prodigal Son and St. John the Evangelist, compose its substance. The first one – a monumental in its form – refers to the painting of the Guercino circle. The greater intimacy of the second one indicates an origin in Naples.

The presentation of this collection was prepared within the cultural program of exchange between the Szczecin institution and Muzeum Sztuki in Łódź. The program concentrates on the issue of collectorship in Central Europe, which is exemplified by collections of two centers with rather different history. Despite essential differences, both collections have a lot in common. Admittedly, the Szczecin collection was initiated by activity of Pomeranian dukes in the 16th and at the beginning of the 17th centuries. The Szczecin collection gained its splendor in the second half of the 19th century and at the beginning of the 20th century – similarly to the collection of the early masters of the museum in Łódź. Both collections are also largely scattered due to war and barbarous actions of the totalitarian systems of the 20th century. Works which were reproduced and complemented after the Second World War, compose today valuable collections of the European art and have a superregional meaning.

The exhibition is accompanied by a bilingual (Polish-German) catalogue, which is richly illustrated.