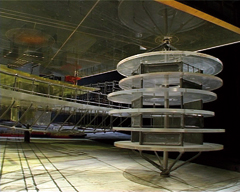 This major exhibition at the Gemeentemuseum is intended as an ode to the versatile artist Constant Nieuwenhuijs (1920-2005). It will address every period of his oeuvre and every medium in which he worked. The selection of works on display will be designed to showcase the achievements of this great painter of the second half of
the 20th century in a poetic manner.

Constant’s oeuvre encompasses three distinct periods. His career began immediately after the Second World War, when he was a member of the experimental Cobra group, which recast painting in a new, rebellious, aggressive and liberating mould. However, Constant quickly set himself apart from the other members of Cobra by the distinctive way in which he sought to make his work subservient to his sense of social commitment. He aimed to transcend the fantastical animals and cephalopods of Cobra and to develop a visual idiom which had the potential to influence and shape the new post-war world.

Around 1955 he was actually preaching the death of painting, which he saw as a totally outdated medium, and was looking for other ways to visualise a world of total freedom. The result was the vast, utopian New Babylon project, comprising countless maquettes, drawings, oil paintings and water colours. He worked on this for many years (from 1956 to 1972), invariably accompanying the results with pamphlets, manifestos, interviews, films and photographs. Constant’s aim was to communicate his ideas to a broad public and achieve a radical new collective form of creativity. New Babylon and Constant’s utopian vision of a world in which people could invest all their energy in a ludic experience of freedom have attracted renewed interest in recent years as a result of the immense appeal of the work to architects and urban planners. One of the new Wonderkamers in the Gemeentemuseum, ‘A New World’, is entirely devoted to New Babylon, visualised on film by Constant’s son Victor Nieuwenhuijs.

Finally, in the last thirty years of his life, Constant the painter re-emerged, as the artist dedicated his life anew to the art of painting. Initially, the art world was inclined to regard this about-face as a reversion to tradition and the action of an artist approaching senility. However, the fact is that Constant had never ceased to produce drawings, etchings and paintings in the privacy of his own studio, albeit for many years not for the market. Until 1974. In that year he suddenly began to make water colours and to exhibit paintings in the tradition of Velázquez, Titian and Rembrandt. Below the surface of these highly finished and classically constructed paintings, however, the themes that preoccupied Constant remained the same: freedom, war, the romantic image of the nomadic gypsy and the circus performer, and above all Casanova and Orpheus, as the two forces driving man to express a belief in beauty.

Ode to Constant will wantonly ignore this three-way split in Constant’s oeuvre and refuse to provide a chronological overview. The exhibition will include not only paintings, maquettes and works on paper from the collection of the Gemeentemuseum, but also a host of works from private collections. It will be accompanied by a publication.