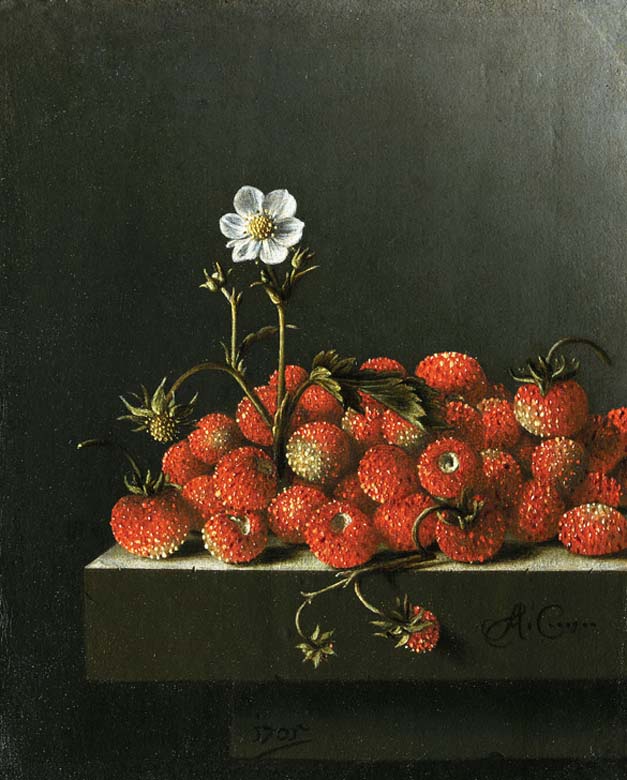 In the coming spring the Mauritshuis will be paying tribute to the 17th-century still-life painter Adriaen Coorte with the survey exhibition Ode to Coorte. His paintings usually depict fruit or vegetables, though sometimes also nuts or shells. Coorte’s facture was highly refined, and his works small in scale. The objects in his still lifes are often shown life-size, resting on a stone table, and always lit up against a dark background. Presently, magnificent works by Coorte, such as his Still life with wild strawberries and Still life with apricots held by the Mauritshuis, rank among the public’s favourite paintings. Coorte’s oeuvre currently counts about 60 paintings, more than half of which will be on view at the exhibition.

Ode to Coorte is not only a tribute to Coorte, but is also dedicated to Frits Duparc, who will be resigning as director of the Mauritshuis in the beginning of 2008. The exhibition is made possible financially by Van Lanschot Bankers and a group of private individuals. The Mauritshuis is grateful to Pieter Dreesmann and David Koetser for securing the support of these sponsors.

We are groping in the dark with regard to the details of Adriaen Coorte’s life. Neither his date of birth nor that of his death is known. However, he must have been active in the vicinity of Middelburg as emerges from the fact that his paintings were in 18th and 19th-century sales held there, at which – incidentally – they did not fetch very high prices. This raises the question of whether Coorte actually made a living from painting. Moreover, he was not registered with the local painters’ guild. Stronger still, in 1696 the Middelburg Guild of St Luke fined Coorte as a non-member for selling his paintings locally. In the course of the centuries, Coorte’s name sank into oblivion. Interest in Coorte’s work has revived only in recent decades and the driving force behind this reassessment was Laurens Jan Bol, former director of the Dordrecht Museum, who organised the first exhibition devoted to this painter in 1958.

Everything but apples and pears

Coorte’s strawberries, apricots, asparagus, artichokes, berries, grapes, hazelnuts, chestnuts, cherries, medlars, peaches, plums, shells and walnuts look so real. Here and there, small insects crawl through the composition. Subtle details – a twig, flower, butterfly or dragonfly – are found everywhere. The rendering of the objects in the still lifes is so true-to-nature and realistic that the depictions of the fruit, vegetables, nuts and shells could easily feature in contemporary popular cookbooks and glossy magazines. Coorte must have been fond of strawberries and asparagus, for they each featured as the subject of his paintings close to 12 times. The only precious objects he painted more than once are shells and a Wan-li bowl, which were brought from distant shores by the Dutch East-India Company.

Adriaen Coorte’s oeuvre comprises more than 60 signed paintings, almost all of which are dated between 1683 and 1705. Initially Coorte painted more traditional subjects, such as vanitas still lifes, before concentrating on fruit, vegetables, nuts, and shells. His earliest work was strongly influenced by Melchior d’Hondecoeter, who produced primarily decorative paintings of birds. In fact, the ducks in Coorte’s Mountain landscape with ducks from 1683 are taken directly from bird pieces by D’Hondecoeter. The whereabouts of several of Coorte’s paintings are unknown and all we have are old descriptions of them. Once in a while a painting by him resurfaces, for instance last summer, when the Still life with a branch of gooseberries from 1693 was recovered in Germany. This still life, which was last seen at an auction held in 1889, will not be on view in the exhibition, but is included in the new Coorte catalogue raisonné. The Still life with two walnuts (1702) from the Szépmüvészeti Muzeum in Budapest, which is currently being restored at the Mauritshuis, is the smallest painting Coorte made: it is as ‘big’ as a picture postcard.

Coorte painted almost two-thirds of his still lifes on paper. During the development of the depiction or directly after completion he probably affixed the paper to a panel or canvas. However we currently assume that Coorte mostly carried this out himself, there are some indications that the painted sheets of paper were affixed to a sturdier support much later, in the 18th and 19th century. It happens that the so-called marouflé technique was rarely used in the 17th and 18th century. In 2006 the Still life with two peaches and a butterfly (1693-95) came up at a sale in London. An interesting discovery was made during its restoration when the painted paper was detached from its wooden support: the still life was executed on the back of an invoice.

Not only Coorte’s use of paper, but also his painting technique is noteworthy. Regardless of his refined and detailed painting style, Coorte sometimes struggled with the correct rendering of perspective. The stone tables or earthenware bowls are not always accurately depicted. Nevertheless, for many of his admirers, it is precisely these distortions that lend Coorte’s paintings a certain charm.

Ode to Coorte is accompanied by an oeuvre catalogue with illustrations of all the paintings currently attributed to the master. Written by Quentin Buvelot, this survey is a new and clear compendium of all of Coorte’s known paintings. It includes an introductory essay, as well as colour illustrations of all of the works on view.
The still lifes of Adriaen Coorte (Uitgeverij Waanders) is available in Dutch and English,in softcover and hardcover.