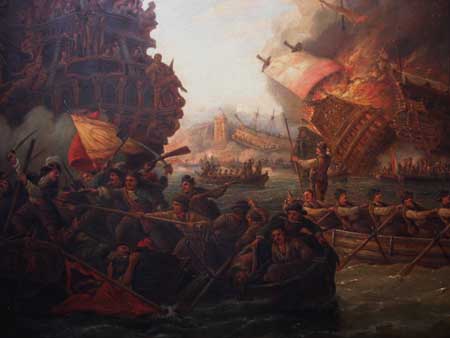 Old Masters, New Eyes offers a fresh look at Dutch and Flemish Old Master oil paintings from the collections of Brighton & Hove Museums, some of which have not been on public display for more than 40 years.

The exhibition brings together about 30 oil paintings, dating from the 15th century to the mid 19th century. They feature an array of subjects including religious icons, landscapes, mythological legends, still lifes, seascapes and epic battle scenes. The paintings include panels by – or attributed to – significant painters such as Jan Molenaer, Jan Mostaert, Justus Juncker, Abraham Stork and Joachim Patinir.

Old Masters, New Eyes has resulted from new research which unearthed some fascinating facts about the importance of the paintings to their creators, their content, and their past lives before they came into the collections at Brighton Museum. For example, an early Flemish portrait has been newly identified, having hung in Preston Manor for over 70 years and thought to be anonymous. The subject is now known to be Floris van Egmond, Count of Buren, and the work attributed to Jan Gossaert, who was painting about 500 years ago. In addition, research revealing that the 18th century English artist Henry Fuseli was an admirer of Jan Lievens’s Raising of Lazarus further enhances the reputation of Brighton Museum’s most celebrated painting, as well as shedding light on Fuseli’s own work and influences.

Much of the new information has been unearthed by Timothy Williams. Having recently graduated from the University of Sussex with a Masters Degree in Art History, Tim was awarded a MacGregor Scholarship to work with curators and conservators at Brighton Museum to study this part of the art collection. The results of his research enabled this new display to be assembled and the information about the paintings and their makers to be made public.

The exhibition coincides with the launch in November 2007 of a national online database of such paintings in many collections around Britain. Old Masters, New Eyes is a chance for members of the public to see the real thing.