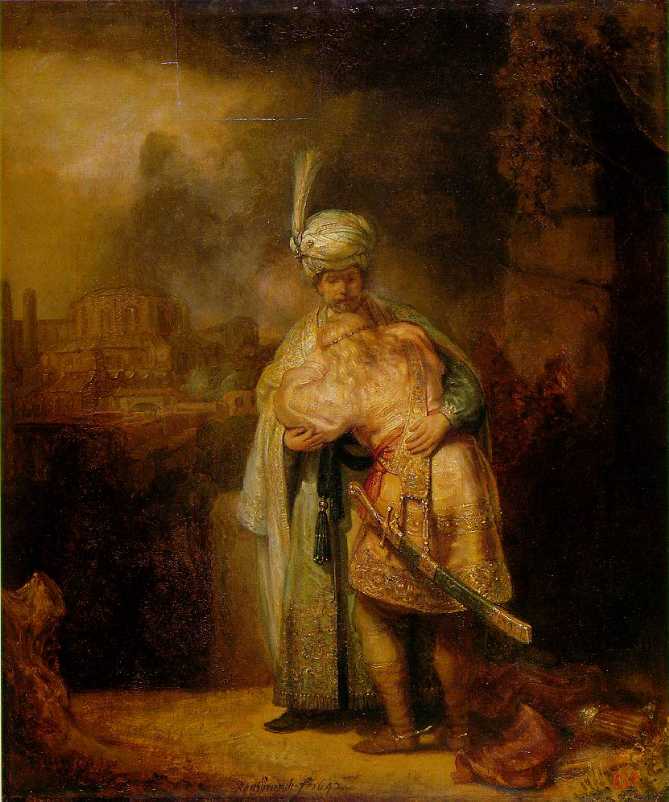 On 26 July, 2002, the State Hermitage Museum took part in the Hermitage Day in Peterhof which marked the 277th anniversary of the foundation of the first Russian Hermitage. The Peterhof Museum hosted a one-day exhibition of the most famous painting in the collection of Peter I, Rembrandt’s David and Jonathan.

The canvas was bought at the auction sale of Jan van Beuningen’s collection in Amsterdam on 13 May, 1716, according to Peter’s instructions, for Monplaisir Palace in Peterhof; in 1882 it was transferred to the Hermitage.

Russians started to collect West European painting in the first quarter of the 18th century. The largest collection in this epoch was put together by Peter I in Peterhof where it is still kept in Monplaisir Palace and Hermitage Pavilion, though substantially changed. David and Jonathan was mentioned in the 18th century among 29 works of art in Monplaisir Palace. A palace inventory made in the 19th century says that Rembrandt’s masterpiece was exhibited in a black frame.
There are a few drawings of Rembrandt from the first half of the 1640s which tell this Old Testament story (1 Kings). Prince Jonathan, son of King Saul, made a covenant with David giving him his garments, bow, sword and girdle. Learning of King Saul’s intention to kill David, Jonathan left the palace in secret and hurried to forewarn the young man that he was in danger. Their meeting took place by the stone Ezel where David was hiding. The Bible says that David arose out of a place toward the south, and fell on his face to the ground, and bowed himself three times: and they kissed one another, and wept one with another, until David exceeded.

The dramatic images (saddened Jonathan is raising David from his knees and keeping him up tenderly while he is crying in his bosom) show that Rembrandt knew Josephus Flavius’ Jewish Antiquities, where the characters’ emotions before the parting are described in greater detail compared to the Biblical text. Many details mentioned in the Old Testament are included into the composition, the stone Ezel which can be seen behind Jonathan’s figure, rich garments, girdle and sword given by the Prince to David, arrows used to give signal and entrance to David’s hideout.

Rembrandt gave Jonathan his own features, while David’s appearance and behavior have something womanly in them. Possibly the painting revives the artist’s memory of the parting with his wife Saskia who died in a young age.