Our Collection in Question

As part of the Museum in Questions campaign launched in the autumn of 2021, the Royal Museums of Fine Arts of Belgium are keen to participate in the debate surrounding current social matters. Two exhibition rooms contextualize two hot topics for museums around the world: by shedding scientific light on the questions of colonialism and diversity, on the one hand, and the problem of the restitution of cultural goods looted during the Second World War, on the other, the Royal Museums aims to be a laboratory for reflection that will enable us to participate in the construction of the museum of tomorrow, by insisting on how scientific research, one of the museum’s primordial missions, can contribute to the contemporary debate.

The issue of restitution is not new and is in fact broader than the most prominent case, that of the lootings committed during the Second World War and during the Third Reich. The Old Masters and Modern painters brought together in one room bear witness to the complexity and continuing relevance of the issue, some 76 years after the end of the Second World War. There is only one way to identify works of questionable source, and that is to investigate their provenance. Knowing in which hands a work has circulated from the time it left the studio to the present day is an essential but laborious task, which still raises many questions today. The very specific case of the painting by Lovis Corinth presented here reveals the complexity of the restitution process.

Are there any international agreements on the matter? Were the lootings organized? Was the art market involved? Where do the Royal Museums of Fine Arts of Belgium stand today? These are a few of the questions that we try to answer in this thematic room.
On view in the Old Masters Museum – Room 51

Titles of artworks are being questioned in museums around the world: the responsibility of museums to be inclusive and non-discriminatory has grown in intensification following social movements such as #metoo or #BlackLivesMatter. The Rubens work in this room, which has been renamed for the second time after 2007, is a typical example of how a title can remind the public of a painful colonial experience. The Royal Museums validate the public’s reactions and aim to commit to a policy of inclusion, based on historical facts and contexts, and thus, in that way, contribute to a scientifically based debate. 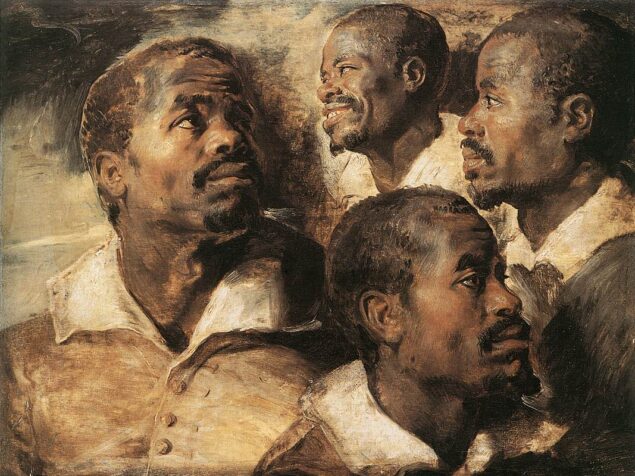 Why is the title of a Rubens masterpiece today now more than ever the subject of discussion? Why was this oil sketch originally untitled and what was its function in Rubens’s studio? What were Rubens’s original intentions and what place did people from Africa have in his thinking and work? These are all questions around which we would like to stimulate a constructive dialogue.
On view in the Old Masters Museum – Room 60