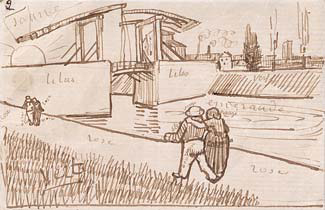 Painted with Words is a compelling look at Vincent van Gogh’s correspondence to his young colleague Émile Bernard between 1887 and 1889. Van Gogh’s words and sketches reveal his thoughts about art and life and communicate his groundbreaking work in Arles to his fellow painter. Unseen for nearly seventy years, and never before exhibited, the twenty letters document the close, vital friendship of the two artists.

Van Gogh’s letters to Bernard reveal the tenor of their relationship. Van Gogh assumed the role of an older, wiser brother, offering praise or criticism of Bernard’s paintings, drawings, and poems. At the same time the letters chronicle van Gogh’s own struggles, as he reached his artistic maturity in isolation in Arles and St. Rémy. Throughout the letters are no less than twelve sketches by van Gogh meant to provide Bernard with an idea of his work in progress, including studies related to the paintings The Langlois Bridge, Houses at Saintes-Maries-de-la-Mer, Boats on the beach at Saintes-Maries, The Sower, and View of Arles at Sunset.

To complement the letters, more than twenty paintings, drawings, and watercolors by van Gogh and Bernard are on view. These works document their dynamic exchange of ideas—among them are paintings and drawings discussed and sketched by van Gogh in his letters to Bernard. The works of art are drawn mostly from collections outside of New York, and feature numerous works not recently shown in the U.S.

Major support for Painted with Words: Vincent van Gogh’s Letters to Émile Bernard and its accompanying catalogue was provided by the International Music and Art Foundation. Generous support was also provided by the Robert Lehman Foundation and the National Endowment for the Arts.

Van Gogh’s letters to Emile Bernard are characteristic of the exchange of ideas between the two enthusiastic artists. This is the first time that the letters, written originally in French, have been published with an English translation and facsimiles of each sheet, with a wealth of illustrations of the art that Van Gogh produced in this period and which inspired him. The original letters are owned by The Morgan Library & Museum in New York. They are on public view there through 6 January 2008 in the exhibition Painted with words.