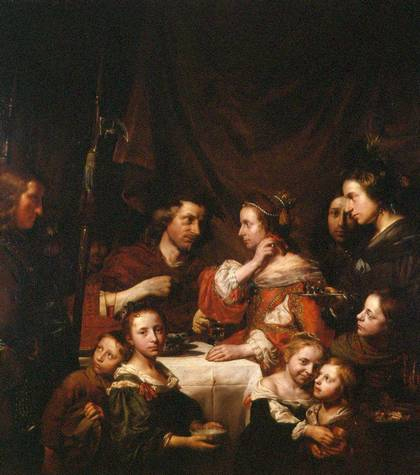 Virtually unknown now, the De Bray family were very important painters in Holland in the 17th Century. The exhibition ‘Painting Family’ examines a remarkable but largely forgotten family whose place at the heart of the Dutch Golden Age deserves to be reassessed. They painted historic and mythological figures, portraits, flower paintings and still lives (and three pictures of herrings).

The National Gallery’s Dutch Portraits: The Age of Rembrandt and Frans Hals introduced a new name to many of its visitors – Jan de Bray. Virtually unknown now, De Bray’s portrait, owned by the Queen, of his father and mother as Mark Antony and Cleopatra, was one of the highlights of the show. That painting makes a second appearance at the heart of the exhibition at Dulwich. For Jan de Bray was not a mere one-off. He was in fact the most important painter in Haarlem in the second half of the 17th century, a mantle he inherited from his father Salomon, who trained him. In fact the family is one of the dominant artistic dynasties of the Dutch Golden Age – Jan’s brothers Dirck and Joseph were also artists.

This beautiful show will be a complete revelation to all lovers of 17th century Dutch art. It will feature masterpieces by all four De Brays. Dirck painted bouquets of flowers; Joseph’s three surviving paintings all celebrate the herring. The brothers were grand masters of historic storytelling and the portrait historié, a form of portraiture which Jan developed, in which sitters take on the roles of historic or mythological figures. Salomon and Jan will dominate the show; and we hope that Jan will take his rightful place in the pantheon of Dutch masters alongside the man he succeeded as the preferred portraitist of the great and good, Frans Hals.

In the tradition of great Dulwich exhibitions such as Dutch Flower Painting, Pieter de Hooch, Gerrit Dou: Rembrandt’s First Pupil, Rembrandt & Co: Dealing in Masterpieces and Adam Elsheimer (declared the best international show of 2006 by Apollo magazine), this magnificent exhibition examines a remarkable, but largely forgotten, family whose place at the heart of the Dutch Golden Age, deserves to be reassessed. The whole family springs to life in Jan’s startling canvasses. This show will introduce these likeable and ingenious personalities to a brand new public.