During the final years of World War II, Allied forces endeavored to protect artworks, archives and monuments of historical and cultural significance across Europe, and they worked to return works looted by the Nazis to their rightful owners in the postwar period.

These efforts were led by the “Monuments Men,” the men and women of the Monuments, Fine Art, and Archives program, established in 1943 under the Civil Affairs and Military Government Sections of the Allied armies. Their ranks included museum curators, art historians, and others trained to identify and care for works of art. 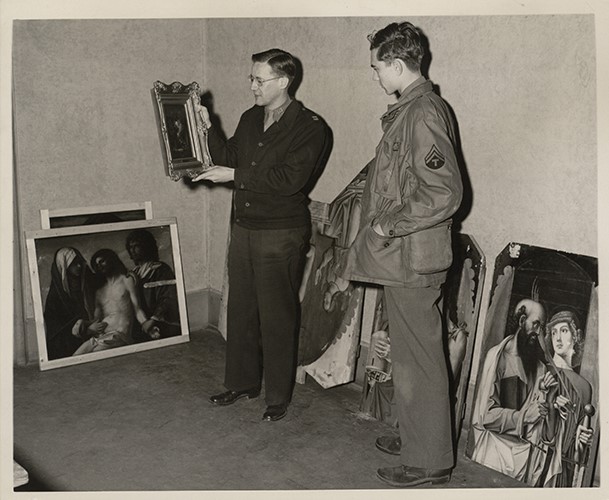 From the rise to power of the National Socialists in 1933 through the end of the war in 1945, Nazi policies and practices resulted in systemic repression of modern artists in Germany, the looting and forced sales of artworks—especially from Jewish collectors—across Europe, and artworks changing hands through other unethical or questionable transactions.

Paintings, Politics and the Monuments Men explores examples of these uses and abuses of art with paintings on loan from the National Gallery of Art and the J. Paul Getty Museum. It turns the spotlight on a lesser-known episode in the movement of artworks in this era: 202 sixteenth- to eighteenth-century paintings from the State Museums in Berlin that were recovered by the US Army in a salt mine at the end of the war, and their long and controversial journey that followed. They traveled to the US in 1945 and were exhibited in 14 cities across the country, before returning to occupied Germany and, decades later, back to the rightful possession of the Prussian State and the German people. The paintings’ temporary transfer out of Germany was met with outcry on both sides of the Atlantic, but their exhibition in America was greeted with huge enthusiasm, drawing almost 2.5 million visitors.

At the heart of the exhibition, visitors will see four of the original paintings lent by the State Museums of Berlin, including Sandro Botticelli’s “Ideal Portrait of a Lady,” paired with paintings from the Cincinnati Art Museum’s permanent collection by artists represented in the “202,” such as Andrea Mantegna and Peter Paul Rubens.

An award-winning major publication, produced by the Cincinnati Art Museum with D Giles Limited, accompanies the exhibition and features new scholarship from European and American curators and historians. The publication was organized by Dr. Bell and Dr. Kristi A. Nelson, executive vice president for academic affairs and provost at the University of Cincinnati, who are also co-curators of the exhibition.

from the museum's press release