Over three centuries ago, Gijsbert Cuper, the alderman of Deventer ordered Hofstede van Essen (act. 1693-1702) to paint a large view of Palmyra. The painting, now in the collection of the Allard Pierson Museum, has returned to the city it was made for in the exhibition Palmyra Stad van Duizend Zuilen in Deventer.

Information from the museum

The exhibition ‘Palmyra. City of a Thousand Pillars in Deventer’ is on view in Museum De Waag from November 11 onwards. It tells the story of the ancient Syrian city from its discovery by the Western world in the 17th century, till the recent dramatic events.

The exhibition is triggered by the recent vandalisation of the site by IS, as well as by the historic relationship between Palmyra and Deventer. What motivates the violence of IS? And how do Syrians themselves experience the loss of their cultural heritage? More than three centuries ago, Gisbert Cuper (1644-1716), scholar and mayor of Deventer, commissioned a colossal painting of Palmyra. It marks the beginning of the fascination with these ruins by the Western world.

In 1694, the more than four meter wide painting ‘View on Palmyra’ by the Dutch painter Gerard Hofstede van Essen, arrived in Cuper’s home in Deventer. It was the first representation of the ruins that came to the Western world. At present, this imposing painting is part of the collection of the Allard Pierson Museum in Amsterdam. After three centuries of absence it now returns briefly to Deventer for the exhibition.

Over the centuries, Palmyra has lost none of its original appeal. Showpieces from various Dutch museums and libraries illustrate the ever-changing views on Palmyra. The City of a Thousand Pillars is known through just as many stories.

The exhibition is organised by Deventer Verhaal, in cooperation with Archeologie Deventer, the Rijksmuseum van Oudheden in Leiden, the Koninklijke Bibliotheek in Den Haag, the Allard Pierson Museum in Amsterdam, and Bijzondere Collecties of the University of Amsterdam. 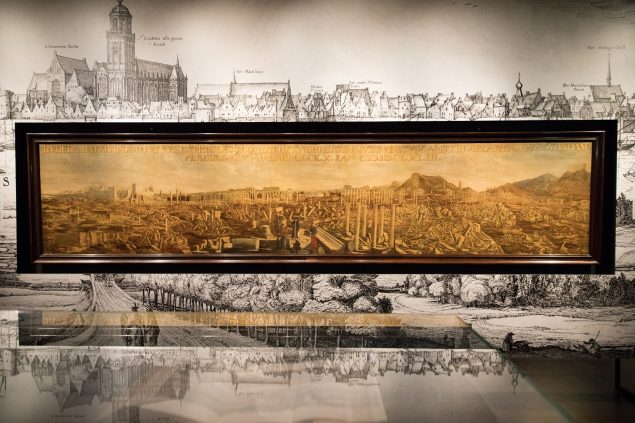