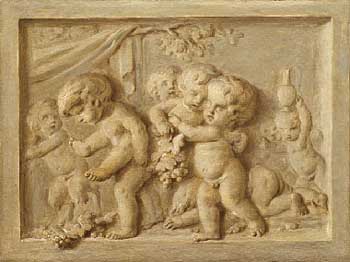 No colour, nothing but nuance! The verse from Paul Verlaine’s “Song of Autumn” perfectly captures this exhibit, which takes visitors through three centuries of fine art in search of a phenomenon long present in the arts but little known to the public: grisaille, also known as camaieu or monochrome. Through some sixty famous paintings by well-known artists (Rubens, Le Brun, Boucher, Greuze, Daumier, Carpeaux, Doré, Moreau, Toulouse-Lautrec) representing the principle European schools of painting, the exhibit spotlights this exquisite technique, an artistic cross between painting, drawing, and illusionism decor. Used for trompe-l’œil, sketches of great works, or free expression, depending on the era, this art gives the visitor an unexpected glimpse into the secret worlds of many great painters.

After evolving in frescos, illumination, enamel, and stained glass, grisaille first appeared in painting in Flanders in the Middle Ages, serving a liturgical purpose: During the Lenten period, altarpieces were closed and only the outer, sober, colourless wings could show, masking the polychrome interior. Grisaille could create the illusion of sculpted stone on these exterior panels. Later, in the 16th century, grisaille was often used in preparatory sketches for paintings, and then became an intermediate step between a drawing and a finished work, giving the artist the chance to evaluate the effects of light and shade. It can be also used as a preparatory step for engraving, goldsmith work, or tapestry, and serves an essential imitative function. It lends itself perfectly to trompe-l’œil and the illusionistic representation of other artistic techniques (marble, bronze, gold, antique cameo). It was only in the 19th century that grisaille became an autonomous form of expression for certain artists. Nearly all great painters used this technique at one time or another, but some specialized in this method almost exclusively, particularly in the Netherlands.

An exhibit with grisaille as its theme is quite novel, having only been seen in displays in Houston in 1973 and in Paris (Musée d’Art et d’Essai at the Palais de Tokyo) in 1980. It has certainly never been the subject of a published work: Our catalogue will be the first and only general work available on the matter, and purposely focuses on easel painting between the 16th and 19th centuries. The aim of this exceptional exhibit is to share the beauty of this form of painting, which was often meant for the artist’s eyes only in the privacy of his studio. The diversity of technique and style is as pleasurable as it is informative and, above all, these spirited, powerful, and sensitive works will delight not only the eye, but the heart of any visitor.