Peasants and Proverbs: Pieter Brueghel the Younger as Moralist and Entrepreneur

This autumn, the Barber Institute will shine the spotlight on Pieter Brueghel the Younger (1564 – 1637/38), an artist who was hugely successful in his lifetime but whose later reputation has been overshadowed by that of his famous father, Pieter Bruegel the Elder (ca.1526/30 – 1569).

Peasants and Proverbs shares recent research into the Barber’s comical yet enigmatic little painting, Two Peasants binding Firewood, ca.1604-16, which entered the collection in 1944. The focus exhibition will set out fresh insights and offer a new appreciation of an artist whose prodigious output and business skills firmly established and popularized the distinctive ‘Bruegelian’ look of Netherlandish peasant life. The show features seventeen works – including paintings, drawings, etchings and engravings – from collections in the UK, Netherlands, Belgium and the Czech Republic.

Born in Brussels, Pieter Brueghel the Younger was just five years old when his already renowned father died prematurely. Clearly talented, by the time he was around 20 years old, Brueghel the Younger was already registered as a master in Antwerp’s Guild of Saint Luke. Between 1588, the year of his marriage, and 1627, he took on nine formal apprentices, an indication that he had established a successful studio. His workshop produced an abundance of paintings: more than 1,400 are recorded in the standard catalogue raisonné. These range from exact copies of famous compositions by his father, to pastiches and more inventive compositions that further promoted the distinctive Bruegelian ‘family style’, usually focused on scenes of peasant life. He was, consequently, later deemed a second-rate painter, capable of only producing derivative works.

As this Barber exhibition will highlight, a more sophisticated understanding is now emerging of a creative and capable artist, and a savvy entrepreneur, who exploited favorable market conditions from his base in cosmopolitan Antwerp. From this deeper understanding of his practice, his favored subjects and the market for them, we gain a more profound and compelling insight into the society in which he operated and its preoccupations and passions. 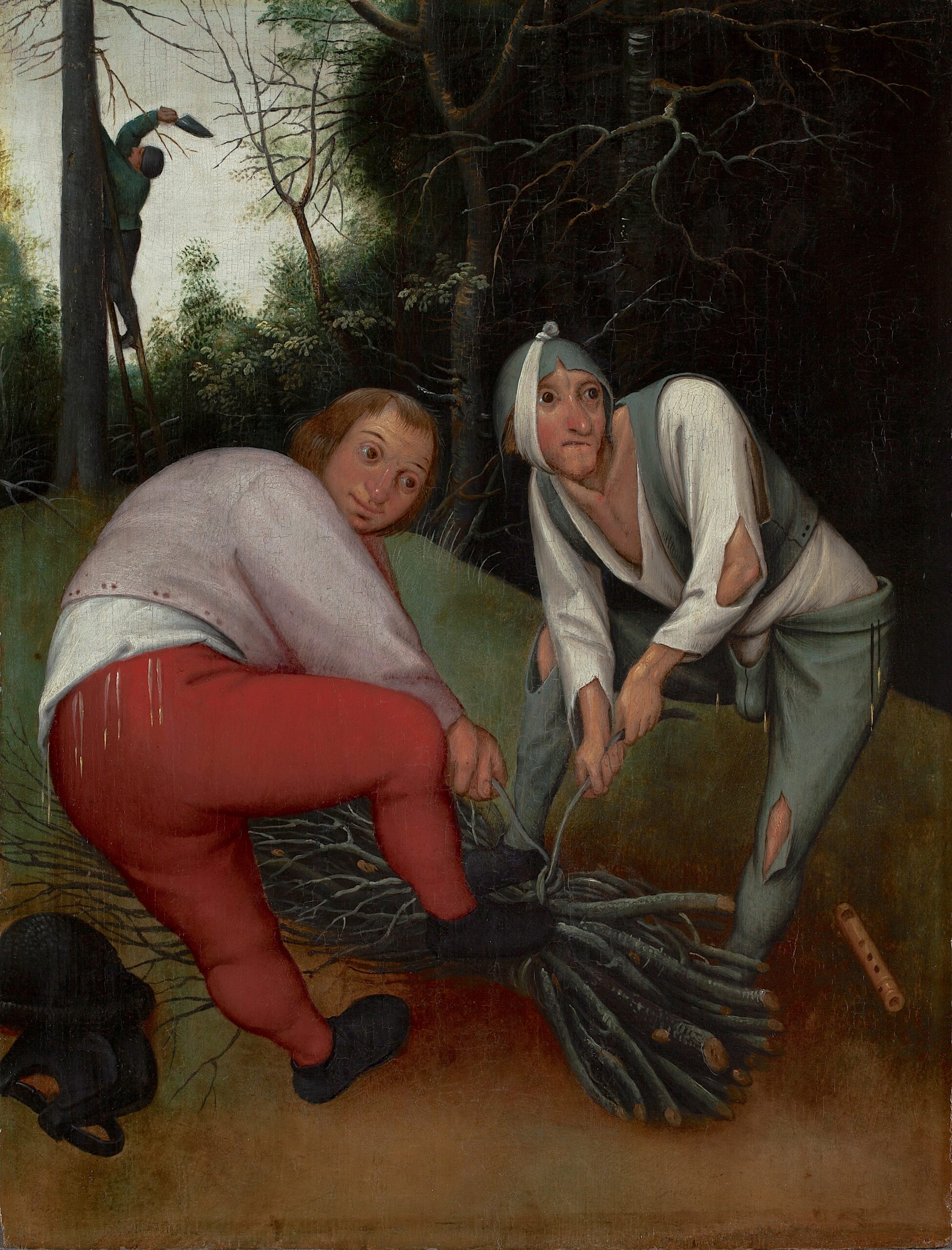 A dozen other versions of Two Peasants binding Firewood exist, and three of them will be featured in the exhibition alongside the Barber version. These generous loans will be traveling to Birmingham from a private collection in Belgium (ca. 1604-16), the Rijksmuseum Twenthe in Enschede (ca. 1616-38), and the National Gallery Prague (a copy of ca. 1615, or later). By displaying these alongside the Barber painting, and using the insights gleaned from recent conservation work and technical analysis, the exhibition and accompanying catalogue will explore how Brueghel the Younger operated his studio to produce and reproduce paintings, and the extent to which the entire enterprise was motivated by trends in the contemporary art market.

Technical analysis of the Barber painting has confirmed that it is a typical example of Pieter Brueghel the Younger’s production. Its oak support is marked with the same panel-maker’s stamp as two other paintings from the workshop, which suggests it was produced in Brueghel’s early or middle career. The model for the composition is lost, but was perhaps an original painting by Pieter Brueghel the Elder. The Barber painting’s paint-layer structure and underdrawing are typical of works made in the Younger Brueghel’s studio. Comparison with the Belgian private collection version suggests that a common cartoon was used in both paintings for the transfer of the design, as was customary. The build-up of the paint layers, starting at the back and working forwards leaving reserves for forms yet to be painted is part of the Younger Brueghel’s usual technique, and has ensured the continued vibrancy of the colors to this day. Stylistic comparisons of the underdrawing and painting with the Belgian version also suggest the two works were drawn and painted by the same hand – that of Pieter Brueghel the Younger.

The exhibition will also probe the likely meanings and significances of the painting’s intriguing, but evidently popular, subject – the gathering of firewood in winter. Two Peasants binding Firewood provokes so many different questions. Should it be understood as an approving commentary on the virtue of pastoral labor or as a criticism of rural pilfering? Do the two figures, one thin, one fat, represent the sins of gluttony and lechery? Is Pieter Brueghel the Younger making his wealthy patrons confront the hardships of peasant life or amusing them with his depictions of conventional humorous types? 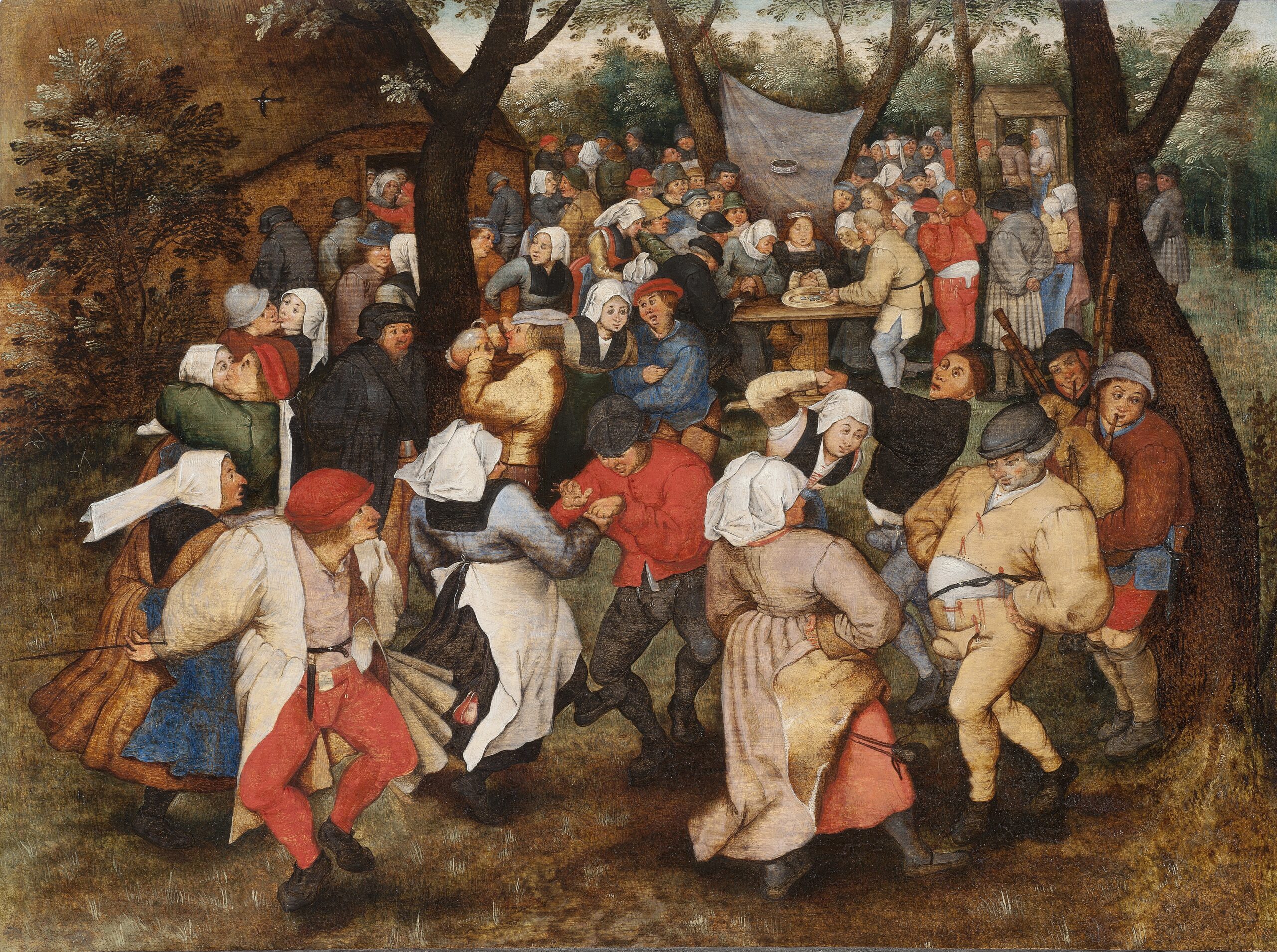 Such questions open up the rich Netherlandish tradition of proverbs, against which these scenes showing the cyclical and symbolic nature of the agricultural year can be better understood; therefore the exhibition includes key works representing peasants and peasant festivities, proverbs and the established convention for showing the agricultural activities of the year (all fields in which the Elder Bruegel’s works were enormously influential).

Other works by (or after) Pieter Brueghel the Younger in the exhibition that explore these themes are The Wedding Dance, ca. 1607 – 14 and Robbing the Bird’s Nest, ca.1620, both on loan from the Holburne Museum, and Netherlandish Proverbs (early seventeenth century) from Nuffield College, University of Oxford. Peasant wedding dances and feasts will also be examined through Marten van Cleve’s The Wedding Dance, ca. 1570, from the Mayer van den Bergh Museum, Antwerp, and a ca. 1597 drawing after Pieter Brueghel the Elder, by his younger son, Jan (1568-1625), from the British Museum.

Pieter Bruegel the Elder will be further represented in the exhibition through four engravings after his designs on loan from the Ashmolean Museum – Prudentia, 1559, Kermis at Hoboken ca.1559-60, The Fat Kitchen, 1563, and The Thin Kitchen, 1563.

Other loans include a superb, illuminated calendar leaf by Simon Bening (ca. 1540-60, British Library) that shows two men chopping down a tree, representative of March, and a 1526 edition of Erasmus of Rotterdam’s Adages (Cadbury Research Library, University of Birmingham), a sxiteenthth-century bestseller, which features and explains several thousand Proverbs.

The lead academic curator for the exhibition is Dr Jamie Edwards (Exeter University), a Brueghel specialist and former lecturer and student at the University of Birmingham. The exhibition is co-curated by Robert Wenley, Acting Director of the Barber Institute.

The display will be accompanied by a richly illustrated full-color paperback catalogue; with contributions from authors including Jamie Edwards, Christina Currie, Ruth Bubb and Robert Wenley, it will be published by Paul Holberton Publishing.