Information from the organizers, 6 March 2019

Continuous battle action on a regional and international scale, economic crises, personal insecurity and fear, and a persistent stream of refugees on the move in search of a better life: these are just a few descriptions, typical of the turbulence of the seventeenth century – though they sound suspiciously familiar as well. The painter Peter Snayers (1592-1667), born in Antwerp, specialised in the portrayal of such battle scenes and was ‘extremenent renommez’ for his work. Cornelis de Bie included Snayers in Het gulden cabinet vande edel vry painter const (1661), a contemporary artist biography, and pointed out that his works were very lifelike even though Snayers had never accompanied an army or set foot on a battlefield. Besides large canvases glorifying generals, Snayers also depicted the common man (or woman) who were plagued by the daily reality of war. The artist’s Robbery of travellers (c. 1640-1650) to which this focus exhibition is devoted, is an example thereof. Such a topic usually does not make it to the history books, yet it stands at the centre of Snayers’ painting, making visual a perspective on daily life that is often absent in (art) history. Typical for early modern art, the painter was inspired by work of other artists; here the influence of Jacques Callot’s print series Les Misères de la guerre (1633), with respect to subject matter and iconography, is being underlined. This exhibition sheds new light on a forgotten master and a forgotten piece of history. On the occasion of this focus exhibition, a new edition dedicated to Snayers’ Robbery of travellers was published in the Phoebus Focus series. 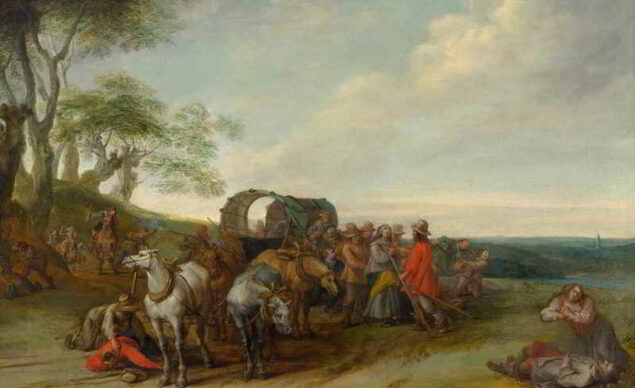