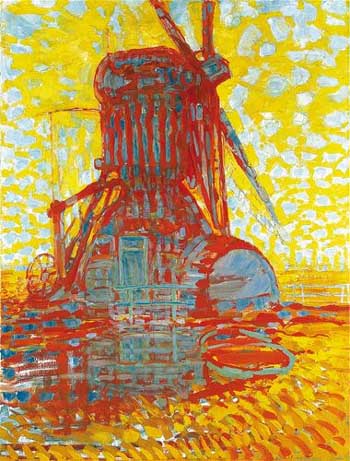 Museum Ludwig will present one of the worldwide largest and most important Mondrian collections from the Gemeentemuseum in the Hague. It traces the development of the artist from his impressionist and cubist beginnings to the founding of De Stijl in 1917 (together with Theo van Doesburg) and neo-plasticism. From the 1920s Mondrian’s paintings were completely abstract with characteristic geometric forms with their optically balanced compositions of red, yellow and blue rectangles in a system of black lines and white areas. These paintings are imprinted in the collective memory, not least because they have been taken up in advertising again and again. The Dutch painter was born on 7 March 1872 in Amersfoort. From 1886-92 he trained as a teacher of drawing and then went to the Amsterdam academy. After Impressionist and early Expressionist beginnings which were still in thrall to symbolism, in 1910 Mondrian discovered Cubist painting. He went to Paris and by 1914 developed a form of uncompromising Cubism which finally became completely abstract. In 1917 he founded the periodical De Stijl together with Theo van Doesburg. From 1920 onwards Mondrian’s paintings are abstract constructivist meditations of horizontals and verticals.