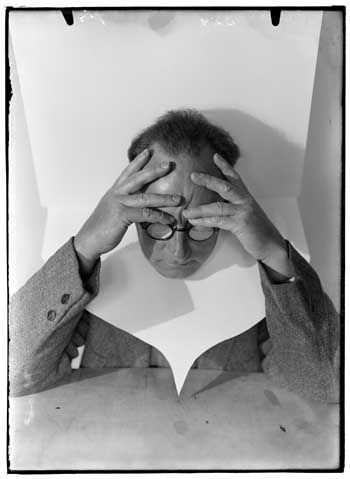 Piet Zwart (1885-1977) owes his reputation mainly to his design for the Bruynzeel kitchen in 1938 and his progressive graphic designs for companies like PTT and cable manufacturer Nederlandsche Kabelfabriek. But the major Piet Zwart retrospective in the Gemeentemuseum this summer shows a much broader body of work. He worked as an interior designer, industrial design, commercial typographer, photographer, critic and lecturer, playing in all these capacities a key role in defining the design climate in the Netherlands in the twentieth century. His versatility and his influence on present-day designers led the Association of Dutch Designers to award him the title of ‘Designer of the Century’ in 2000.

Piet Zwart preferred to call himself a form engineer or form technician rather than a designer. He believed in functionality, standardisation and machine production, and profiled himself as one of the first industrial designers in the Netherlands. In his eyes, a design must take account both of ergonomics and user-friendliness, and of the demands of mass production. The kitchen he designed for Bruynzeel in 1938 is a good example. It was highly progressive for its time. This was the first time that domestic appliances like a refrigerator and stove could be integrated in the design in a practical way. All the elements were designed with logical proportions, and customers could combine them as they wished. Handy details like glass containers, a pull-out bread board and storage racks made the kitchen a textbook example of comfort and ef

The same urge to innovate is also evident in Piet Zwart’s graphic work. His designs are simple and functional, but also playful. Zwart was not a ‘group man’. He was not part of the Amsterdam School or the ‘De Stijl’ movement, though he was influenced by them. At the same time, he was drawn to the international avant-garde, particularly Russian Constructivism. In the 1920s, when Piet Zwart began to work for the progressive Nederlandsche Kabelfabriek In Delft, he was able for the first time to experiment with upper and lower case, lines, circles and screens. He used alliteration, the visual reworking of letter shapes, repetition and combinations of figures and letters, creating his own unique new style that still has great influence today.

Zwart soon incorporated photographs into his advertising images. His photographic work is also very no-nonsense, evidence of his predilection for lines and planes, and his keen eye for detail. Besides advertising photography, he also took images of the surface structures of wood, metal and textiles, and close-ups of organic forms for a while. Many of these photographs possess an almost machine-like element of repetition, reflecting Zwart’s love of structure and balance.

Piet Zwart’s versatility can be seen in a stand he designed for celluloid manufacturer the Eerste Nederlandsche Celluloidwarenfabriek at the fifth Utrecht Fair in 1921. In its simplicity and lack of pretension, this stand illustrates above all his architectonic aspirations. Shortly afterwards he reworked his design drawing to produce an open Constructivist structure of diagonal, horizontal and vertical slats. This revolutionary stand has been reconstructed for the exhibition.