The Museum of National History at Frederiksborg Castle will now run the first exhibition ever on the man behind one of the most famous portraits in the museum’s collection: the portrait of King Christian IV of c. 1614. The portrait shows the self-confident young king at the apogee of his life. Brilliantly painted, the picture has kept its radiance throughout the centuries. The artist’s name is Pieter Isaacsz (1568-1625), who was counted amongst the foremost painters of his time. 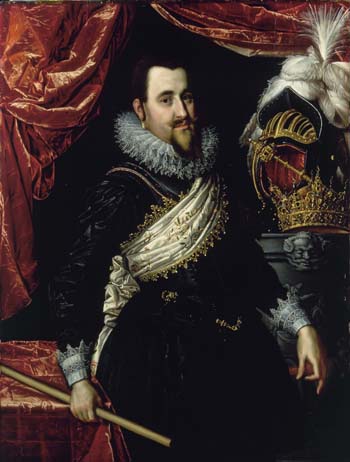 The son of Dutch immigrants, he was born in Elsinore where he spent his childhood years. As a young man, Pieter moved to Amsterdam to become a painter. In the company of other artists, he then went on to wander Europe for several years. Later in life, Pieter returned to Denmark to become the court painter of the king’s choice – and a spy in Swedish service. His stormy life ended where it had begun; in 1625, he was slain by the plague, in Elsinore.

Pieter Isaacsz, detail of Family portrait, 1609.
Jacob was only six years old when his portrait was painted by his uncle Pieter Isaacsz. His uncle made the painting when he visited Elsinore, where Jacob lived together with his family.

At the exhibition, a wide selection of Pieter Isaacsz’s work will be on display, including a seventeen feet wide group portrait, several mythological drawings and allegorical pictures as work by his masters and pupils, amongst them the famous Hendrick Avercamp. The art works stem from the Frederiksborg Castle Collection as from other collections, including Musée du Louvre, Rijksmuseum in Amsterdam and Kunstmuseum Basel, mapping Pieter Isaacsz as the artist of many merits he was, while at the same time giving a unique insight into Northern European relations in art around 1600.

Pieter Isaacsz and art on paper: drawings and prints after his designs
Ilja Veldman

A matter of style: characterizing Pieter Isaacsz as a painter
Eric Domela Nieuwenhuis

The seven ages of man: the decorative scheme for the Great Hall at Rosenborg Castle
Juliette Roding