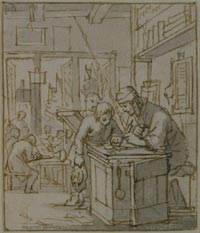 The displayed pen-and-ink drawings and prints come from four different emblem books, authored by Jan Luyken. The images trace the human life cycle from birth to death, with special attention paid to childhood; schooling; the world of daily occupations in Amsterdam’s artisanal workshops, butcher shops and bakeries, industries and shipyards; life at home where domestic chores consumed women’s time and energies; and the customs surrounding death and dying.

Luyken’s emblem books consisted of images and scenes from daily life that were accompanied by rhymed verses and/or Bible passages from Protestant versions of the Old and New Testaments. The images were originally meant to be a stimulus to religious or moralistic thought, a form of spiritual inspiration. “Today Luyken’s images can be viewed as small mirrors reflecting aspects of 17th –century Dutch domestic and cultural life,” according to Dr. Barnes. “His religious sentiments no longer resonate strongly for today’s audiences, but the imagery continues to fascinate viewers.”

“Luyken’s graphic works transport us back in time, providing intimate glimpses into the world known by the Dutch colonists who came to Nieuew Netherland in the 1600s,” Barnes noted. “The daily life depicted by Jan Luyken was very familiar to those who settled on Lang Eylant, Nieuw Amsterdam, and in many communities in New Netherland stretching from what is now Delaware, Pennsylvania, New Jersey, and up the Hudson Valley to Albany, New York.”

Jan Luyken was an exceptionally prolific illustrator during the last quarter of the 17th century and first decade of the 18th century. He produced illustrations for more than 500 different books published in Holland, ranging from illustrated copies of the New Testament; books on accounting, shipbuilding and pharmacy; travel books for those curious about Asia; to books focused on Mennonite thought and the history of Spanish atrocities against Protestant martyrs during the Eighty Years War. He was also the author of 11 books, for which he provided illustrations.

The four volumes in this exhibition include Het Menselyk Bedryf (The Mirror of Human Occupations) published in 1694; Het Leerzaam Huisraad (The Instructive Household Furnishings), and Bijkorf des Gemoeds (The Beehive of the Mind) both published in 1711; and Des Menschen Begin, Midden en Einde(The Beginning, Middle and End of Man) published in 1712 shortly after Jan Luyken’s death.