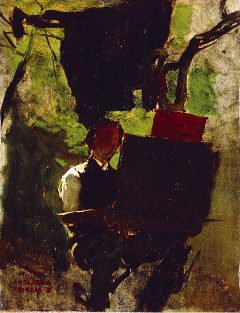 Towards the end of the 19th century, artists turned their backs on history painting in favour of landscape, previously regarded as an inferior genre. In France, the Barbizon School emerged as artists began for the first time to paint outdoors en plein air. This presentation of work from the museum’s own collections will show how the painters of Barbizon influenced the Hague School artists, the former seeking to portray the simple life of the French countryside and the latter the life of fishing and farming communities in Holland. Around 1830, artists began making expeditions from Paris to the forest of Fontainebleau, to work in the open air and depict nature as it really was. This marked a real revolution in the thinking of French artists at a time when history painting was still seen as sacrosanct and the Academy and critical establishment regarded landscape as a second-rate genre.

The painters of the new Barbizon School found a warm welcome and comfortable lodgings at the local inn, the Auberge Ganne, which quickly became a favourite meeting-place for the avant-garde. Painters like Millet, Daubigny, Corot and Rousseau applied the new artistic philosophy in their paintings and drawings. Some artists, including Millet, Rousseau and Daubigny, actually settled in Barbizon and Dutch artists like Jozef Israëls and Willem Roelofs visited the village. The work of the Barbizon School painters was soon appearing in exhibitions in Brussels. That was where the young painter Gerard Bilders encountered the “warm grey” and atmospheric tone of Corot’s landscapes and where Jozef Israëls found inspiration in Jean-François Millet’s depictions of peasant life. Hendrik Willem Mesdag admired Daubigny’s coastal landscapes enough to acquire a number of them for his famous collection and Troyon’s pictures of farm animals had an unmistakable influence on the work of Anton Mauve and Willem Maris. Working en plein air also became a tenet of the Hague School; J.H. Weissenbruch, Anton Mauve and Willem Roelofs worked outdoors in all weathers, in boats on the inland lakes near Noorden, in the polders around The Hague, in the dunes, and on the beach at Scheveningen. The Barbizon School painters greatly admired the realism of the landscapes painted by the Dutch Old Masters of the seventeenth century and the artists of the Hague School saw their new approach to landscape painting as part of the same tradition.

The painters of the Barbizon School were frequently also skilled engravers. Through lithographs and etchings, their work reached a wider public and was disseminated via periodicals. This exhibition will therefore include an important group of French prints from the collection of the Gemeentemuseum Den Haag, on show to the public for the first time in many years.

Finally, it will also include a magnificent set of photographs taken by Dutch photographer Paul Huf (1924-2002), who was commissioned by the Gemeentemuseum in 1986 to photograph the locations depicted in the work of the Barbizon School – areas which have remained essentially unchanged to this day.