Rubens, Van Dyck, Jordaens, … seventeenth-century art history is dominated by Antwerp superstars, whose names ring a bell to everyone. You would almost forget that Brussels was also a vibrant cultural centre in the early modern era. Promising talents such as Hendrick De Clerck (ca. 1560-1630), Michaelina Wautier (1604-1689) and Michael Sweerts (1618-1664) may have created numerous masterpieces, commissioned by the nobility, their names disappeared in the course of time between the folds of art history. Fortunately, these forgotten geniuses have recently received the attention they deserve through extensive art-historical research by various experts. Researcher and curator Lara Yeager-Crasselt, for instance, devoted an exhaustive study on Michael Sweerts, who was a true pioneer of the portrait genre in Brussels (and far beyond). 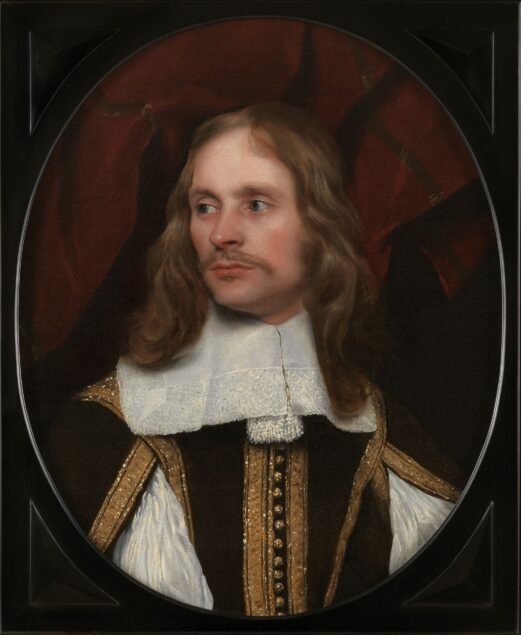 One of the most beautiful examples of Sweerts’ oeuvre is this Portrait of a Man, which the master painted after his return from Rome and right after the foundation of his Brussels drawing academy, with which Sweerts made an important contribution to the academic education of young artists in Brussels. The portrait shows Sweerts’ characteristic style, in line with the Flemish tradition but with a bolder composition. The portrait breathes theatricality: the draped red curtain in the background and the light on the face of the gentleman create a vibrant pictorial atmosphere. In addition, the person being portrayed is particularly dynamic. He has turned his head, as if he is moving. The identity of the man may have passed into anonymity, but there is no doubt that he came from a wealthy family and was extremely fashionable. The doublet with slits and golden details, the elaborate lace collar and the long wavy hair suggest that it was a very distinguished gentleman who posed for Sweerts in the 1650s.

The Portrait of a Man remained under the radar for a long time until it surfaced on the art market in 2010 and was later acquired by The Phoebus Foundation. As part of the collection of the art foundation, the work could finally be subjected to an extensive art historical research by Sweerts expert Lara Yeager-Crasselt. Her fascinating findings can be read in a Phoebus Focus edition, published by Hannibal Publishers. The portrait itself can be admired in the Keizerskapel in Antwerp.