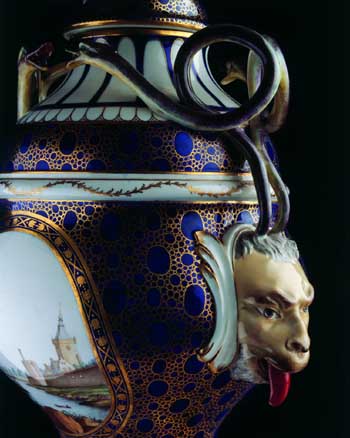 On 22 April, the Pretty Dutch exhibition, a retrospective of the first porcelain that was ever produced in the Netherlands, will open in the Princessehof Leeuwarden. In an exceptional presentation, with moving images and vocal art, this cultural heritage will be extracted from the mists of oblivion. In addition to the porcelain, the Princessehof will also display ‘reflections’ by present-day visual artists.

After a century of silence, the spotlights are again focused on the ‘white gold’ of the first Dutch porcelain manufacturers. The porcelain that was made in the Netherlands in the 18th century was known under the name of ‘Hollands Porselein’. Once the age-old secret of Chinese porcelain production had eventually been unravelled in Meissen at the beginning of that century – at that time, the ‘white gold’ was genuinely equivalent to silver, gold, and precious stones – the number of manufacturers in Europe grew explosively. This was also the case in the Netherlands, where, between 1759 and 1814, porcelain was made at four centres: Weesp, Loosdrecht, The Hague, and along the Ouder- and Nieuwer Amstel river.

Dutch porcelain could certainly compete with the renowned European manufacturers in terms of material and decoration. Great precision and much imagination were applied to floral patterns, birds and insects. This was strictly in line with the fashion of the time. But the ornamental representations of Dutch landscapes, livestock, flowers and fruit display a virtuosity that is seldom encountered abroad. Historical and topographical illustrations, such as the overwintering on Nova Zembla or various cityscapes, were applied in a realistic manner to expensive tea and coffee services. These were in great demand by the prosperous bourgeoisie who were thus able to display their wealth and good taste. Curiosities such as perfume burners, tea caddies, snuff boxes, and even draughts pieces made of porcelain were eagerly desired objects.

Dutch porcelain of the 21st century

Contemporary reflections by well-known visual artists forms an extraordinary aspect of this exhibition. Artists who have made innovative ceramics for the Princessehof over the past ten years have allowed themselves to be inspired by this traditional Dutch ornamental product. They demonstrate how Dutch identity can be expressed in porcelain nowadays. A Vinex location (modern housing estate) instead of an Arcadian landscape? Abstract floral patterns and ditto insects? To them, the challenge lies in the technical refinement, the craftsmanlike features and the decoration.

On the basis of a twenty-first-century vision, Pretty Dutch wishes to focus the spotlight on this eighteenth-century porcelain production. In a spectacular show, old and new masterpieces adorn strikingly revamped exhibition rooms. This exhibition concept breaches the classical manner of presentation, with a play of two and three-dimensional elements, with magnified and moving pictures, embedded in a lively environment of light, colour and sound. Pretty Dutch tells the story of the production process and the decoration techniques, the narrative of the rise and fall of each manufacturer, of the founders, the porcelain painters, the workforce, and the itinerant craftsmen (Wanderarkanisten) without whom the production of porcelain would not have been possible.