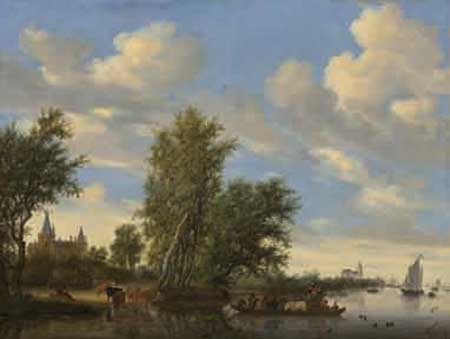 The Bruce Museum presents an exhibition of rarely seen Old Master and other paintings drawn from the collection of Jacques Goudstikker, who was the preeminent dealer of Old Master paintings in Amsterdam prior to World War II. Tragically, he died in an accident while escaping the Nazi invasion. Only recently have his heirs been able to reclaim from the Dutch government 200 of the approximately 1,400 works of art that he was forced to leave behind at his gallery and that were subsequently looted by Reichsmarschall Hermann Göring. Approximately thirty-five of the finest works have been selected for a touring exhibition that will showcase the discerning eye of Jacques Goudstikker and emphasize the importance of both the artworks and their historic restitution to the family. In 2009, the exhibition will travel to The Jewish Museum in New York, NY.

The Bruce Museum in Greenwich, Connecticut, has organized an exhibition of rarely seen Old Masters’ works and other paintings entitled Reclaimed: Paintings from the Collection of Jacques Goudstikker that will have its debut at the Bruce Museum from May 10, 2008, through September 7, 2008. From March 15, 2009, through August 2, 2009, the exhibition will be on view at The Jewish Museum in New York, NY. Additional venues may be announced. Featuring approximately forty of the finest most representative paintings from the collection of Jacques Goudstikker, the exhibition emphasizes the importance of both the artworks and their historic restitution.

Jacques Goudstikker (1897-1940) was the preeminent art dealer in Amsterdam during the period between the First and Second World Wars. He sold paintings to leading collectors and museums and was an influential tastemaker and impresario, mounting shows on neglected topics and artists. Mr. Goudstikker maintained a gallery on Amsterdam’s elegant Herengracht and entertained lavishly in his country home outside Amsterdam and his castle, Nyenrode. His charmed life was cut short when Mr. Goudstikker, who was Jewish, was forced to flee Amsterdam with his family by sea just ahead of the Nazi invasion in May 1940 with his wife, Dési, and their young son, Edo. He died from a fall onboard the ship and left behind approximately 1,400 works of art and extensive properties.

The Goudstikker assets in Amsterdam were soon looted by the Nazis. Reichsmarschall Hermann Göring, a rapacious art collector and second in command in the Third Reich, had personal designs on Goudstikker’s paintings. There was a forced sale of the gallery’s inventory at a fraction of its value to the Reichsmarschall. The gallery’s other assets were taken by Göring’s longtime associate Alois Miedl, who ran the gallery as his own throughout the War under the Goudstikker name.

When the War ended, the Goudstikker paintings that were recovered by the Allies were returned to the Netherlands with the understanding that the Dutch government would give them back to the original owners. Dési, who had settled in America, tried unsuccessfully to recover the artworks that had been taken by Göring and were in the custody of the Dutch government. Eventually, she and her second husband, A. E. D. von Saher, who adopted Edo, returned to her beloved Holland, where she died in 1996. Edo survived her by only a few months.

Edo’s widow, Marei von Saher, initiated the claims process for restitution after the fate of the Goudstikker Gallery was given fresh attention by the Dutch journalist Pieter den Hollander in 1997. A crucial piece of evidence was the small notebook inventorying most of his collection that Jacques had with him when he died and which Dési had kept.

Ultimately, after more than eight years, in February 2006, the Dutch government agreed to restitute 200 of the paintings looted by the Reichsmarschall. Ms. von Saher, a Greenwich, Connecticut, resident, then contacted Bruce Museum Executive Director Peter C. Sutton to seek his assistance in preparing an exhibition of the works being returned to the family. Working with the von Saher family, Dr. Sutton selected approximately forty paintings for a touring exhibition. The show features many of the finest examples of the art restituted to the family, including works that have been sold and borrowed back from the new owners to whom they had been sold. The exhibition Reclaimed: paintings from the collection of Jacques Goudstikker and its catalogue celebrate Jacques Goudstikker’s achievement, expose the atrocities of the Third Reich, and tell the story of the protracted fight for the restitution of Goudstikker’s art.

Jacques Goudstikker’s inventory ranged from Italian gold grounds and Renaissance works of art to early German and Netherlandish paintings, Dutch art of the Golden Age, French and Italian Rococo, and nineteenth-century French and other European paintings. Although his offerings became increasingly diverse, his specialty remained Northern Baroque art. He catered to the leading collectors of his day, selling paintings not only to Dutch museums (notably the Boijmans Museum in Rotterdam, the Mauritshuis in The Hague, and the Rijksmuseum in Amsterdam) but also to the National Gallery in London, the Metropolitan Museum of Art in New York, the Art Institute of Chicago, and to Andrew Mellon for the then-fledgling National Gallery of Art in Washington. He also was a pioneer in the organization of exhibitions, often on an unprecedented scale, mounting the largest show of Italian art ever assembled until that time, as well as the first major exhibition of Peter Paul Rubens’s art, a winter landscape survey, and the only show ever of the landscapes of Salomon van Ruysdael.
Highlights in the exhibition include the first painting of the New World by European master Jan Mostaert, Jan Steen’s dramatic Sacrifice of Iphigenia of 1671, two splendid river landscapes by Salomon van Ruysdael, a rare early marine painting by his uncle Jacob van Ruisdael, an atmospheric View of Dordrecht by Jan van Goyen, and Jan van der Heyden’s View of Nyenrode Castle – the country estate that Goudstikker himself owned and opened to the public each summer in the 1930s. Here, too, are excellent still life paintings and portraits, including a handsome pair of pendants by Jan Anthonisz van Ravesteyn.

The goals of the show are multifold: to reveal the quality of Goudstikker’s offerings, to explore how his tastes influenced patterns of collecting, to tell the dismaying story of the criminal theft of his art by the Nazis, and to recount the protracted legal battle that brought its restitution. In addition to the pleasure of viewing fine paintings, the show offers an opportunity to reflect on the inequities of war, the rapine of cultural property, and the ongoing effort to bring justice to the many cases of property stolen during World War II.

In Greenwich, the exhibition is supported by

LexisNexis Group
U.S Trust
Bank of America Private Wealth Management
The Charles M. and Deborah G. Royce Exhibition Fund
the Seiden-Luke Fund for Exhibitions and Publications
The David T. Langrock Foundation
The Netherland-America Foundation
Malcolm Hewitt Wiener Foundation
and a Committee of Honor under the chairmanship of Connie and Tom Clephane and Virginia and Juan Meyer.

The exhibition is supported in part by an award from the National Endowment for the Arts.