In celebration of the Rembrandt Year, the RKD displays Rembrandt’s path to popularity in a small exhibition. The display includes items from the RKD’s collection, including photos, publications and archival documents that highlight key moments in Rembrandt’s life.

The above rhyme, poking fun at Rembrandt mania, was composed by the Dutch graphic artist Albert Hahn to accompany a cartoon he produced in response to the celebrations marking Rembrandt’s 300th birthday in 1906. Rembrandt’s popularity reached unprecedented heights in the 19th century, when he was appropriated as a national treasure. Following the separation of Belgium from the Netherlands, both countries were keen to promote their own distinctive histories, prompting the need for national heroes. When the Belgians dedicated a statue to their greatest artist, Peter Paul Rubens, there were calls in the Netherlands to do the same with our Rembrandt. The unveiling of the statue, on what is now the Rembrandtplein, was a national event accompanied by musical performances, tributes and a raft of merchandise. Rembrandt belongs to us all!

Gradually the 19th century saw Rembrandt become the subject of more serious scholarship. The research began as the recording of anecdotes about his life, but increasingly a more factual approach was adopted. As early as 1810 the first catalogue raisonné of Rembrandt’s etchings was published. As the century progressed, historical documents were retrieved in dribs and drabs by scholars, including the Amsterdam archivist Pieter Scheltema, whose sniffer-dog capabilities in the archives earned him the nickname ‘Piet Perkament’ (‘Parchment Pete’). 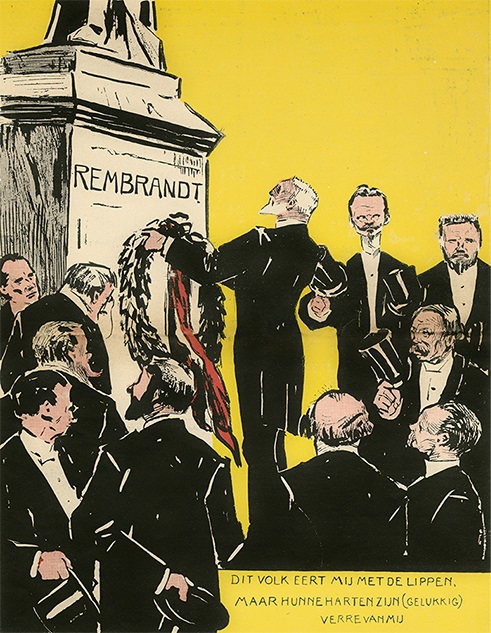 Towards the end of the 19th century, knowledge of Rembrandt’s art was increased considerably by Abraham Bredius and Cornelis Hofstede de Groot. In 1898 this resulted in the first exhibition dedicated to a single old master in the Netherlands, an event for which all the stops were pulled out. Even The Night Watch was taken to the exhibition gallery at the Stedelijk Museum, the short move watched over by a committee of high officials with moustaches. The current focus exhibition at the RKD includes photos of the transport of this famous work across Amsterdam as well as various cartoons, de luxe bindings and unique documents from our own collections.