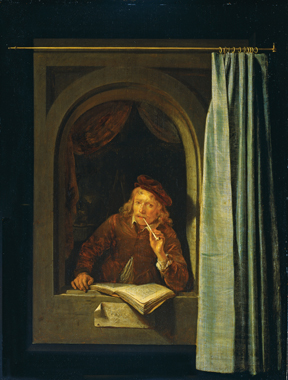 Phoenix Art Museum is one of only three museums in the United States to offer this once-in-a-lifetime opportunity to see works by the Dutch masters from the Rijksmuseum in Amsterdam, including 14 works by Rembrandt. This marks the first time an exhibition of this size from the Rijksmuseum collection will be presented in the United States. A century of great Dutch artists – such as Frans Hals, Jan Steen, Pieter de Hooch, Jan van der Heyden, Gerard Houckgeest, Jacob van Ruisdael, and Rembrandt van Rijn and their contemporaries – are featured in this exhibition, with 90 stellar examples of Dutch 17th century paintings, prints, sculptures, and a fine selection of ceramic, glass, and silver showpieces touted to be the most beautifully produced by 17th century silversmiths. Notable masterpieces in the show include Rembrandt’s Self-portrait as the Apostle Paul, his portrait of his wife, Saskia van Uylenburgh, and Frans Hals’ portrait of Nicolaes Hasselaer. The exhibition will be the first specially-ticketed exhibition in Phoenix Art Museum’s new gallery wing, as a result of its $50 million expansion . It will be specially-ticketed with dated and timed entry.

From the Rijksmuseum press release, 4 November 2004

The Rijksmuseum has entered into an agreement with three museums in the United States. In an exhibition called Rembrandt and the Golden Age: masterpieces from the Rijksmuseum, over 100 paintings and other works of art, including works by Rembrandt, Jan Steen and Frans Hals, are going to be travelling in 2006 and 2007 to the Dayton Art Institute in Dayton, Ohio, the Phoenix Art Museum in Phoenix, Arizona, and the Portland Art Museum in Portland, Oregon. This marks the first time an exhibition of this size of works from the Rijksmuseum collection will be presented in the United States.

The main building of the Rijksmuseum is undergoing a renovation, reconstruction and restoration campaign that will last until mid-2008. Because the museum wishes to keep its collection as widely accessible as possible, it is showing its top pieces in the Philips Wing of the museum itself, while lending out large segments of its holdings to satellites museums in the Netherlands, Germany and Belgium, while organizing travelling exhibitions to the United States and other countries.