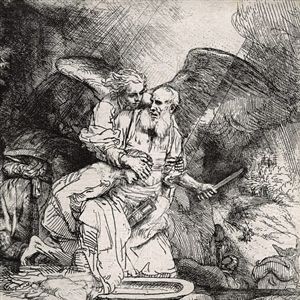 Rembrandt made more than 70 etchings of biblical stories and figures. For the first time all these works are to be shown in a single exhibition, offering a splendid overview of Rembrandt’s development as one of the world’s greatest graphic artists and insight into his unique way of depicting biblical stories. Besides the most famous pieces, very rare etchings will also be on display. Whether the works are new or familiar, visitors will be both surprised and moved by the quality, the variation in style and technique, the unique composition and the great emotional expressiveness of Rembrandt’s biblical etchings.

Rembrandt was undoubtedly one of the greatest and most original of all graphic artists. Because his decision to use biblical subjects began with his very first etching (1626) and continued to his very last (1659), the exhibition constitutes a comprehensive view of his artistic development in this area. His graphic work was not simply a by-product of his paintings but a separate oeuvre in its own right. In creating it, Rembrandt followed in the footsteps of famous predecessors such as Lucas van Leyden and Albrecht Dürer and enjoyed international fame during his own lifetime. As the years passed he expanded his technique, making more frequent use of drypoint and the burin which involved working directly on the copper plate. The results Rembrandt thereby achieved are astonishing, and they still have a contemporary look. After 1640 he began fully combining the techniques of etching, drypoint and engraving. The most spectacular example of this is the etching of Christ Preaching or The hundred-guilder print. This work, highly varied in execution of line, also shows Rembrandt’s other unique strength: the utilisation and subtle manipulation of light and shadow. He sometimes went much further in contrasting areas of light and darkness, as is demonstrated in the famous different versions of The Three Crosses (1655). Two different states of this work are shown in the exhibition.

Rembrandt and the Bible

The exhibition is organised thematically following the sequence of the Bible. Within each theme the etchings are arranged chronologically, so that Rembrandt’s development as an etcher and his choice of subject can be clearly seen. A few etchings and details are shown in magnified form in an audiovisual presentation. The exhibition offers a unique opportunity to view all the biblical etchings together and from Rembrandt’s perspective, resulting in a surprising and fascinating journey of discovery.

Available with this exhibition