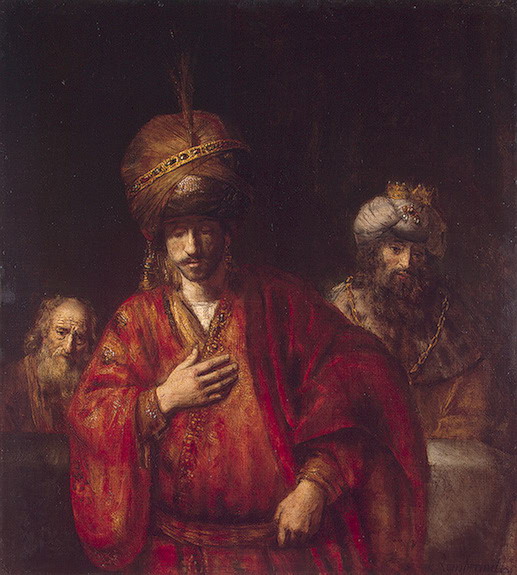 Rembrandt and the New Jerusalem brings together over 190 works (paintings, etchings, artefacts, manuscripts and rare documents), including five paintings by Rembrandt never previously shown in France. It explores the relationship between a major ensemble of works by the master and his contemporaries and a cultural and religious event of considerable significance: the arrival in Amsterdam in the 17th century, in a unique climate of tolerance, of Jewish refugees from the Iberian Peninsula and Central Europe. The Netherlands was then undergoing a period of intense ‘Hebraic identification’, during which the Dutch saw themselves as the new Israelites. The Jewish and Reformed Christian worlds mingled in Amsterdam, the ‘New Jerusalem’, where they forged innumerable religious and cultural bonds. This community of ‘new Christians’, had been forcibly converted in Portugal but secretly never renouncing Judaism. In Amsterdam, they became ‘new Jews’, laid the foundations of modern Jewish society and innovated in many fields: in the organisation of the community, in self-representation in images and archives, in their acculturation and in their integration into society.

The exhibition is framed chronologically by Rembrandt’s life (1606–69), which corresponds roughly to the period from the Jews’ establishment in the Netherlands at the end of the 16th century to the inauguration of the Great Synagogue in Amsterdam (1675). The exhibition’s extensive prologue recreates the Jewish social, intellectual and artistic climate in Amsterdam, showing the dynamism of a community nurtured by the city’s formidable economic growth and the civic freedoms that had enabled its development. Some of Rembrandt’s portraits and history scenes contain echoes of the exchanges and debates between the Jewish and Protestant communities.

Other works open up new lines of thought and reveal similarities, notably via a study of several biblical scenes related to the divine election and salvation of the Jewish people and messianism. The revival of bible reading, the idea of the imminence of messianic times and the fascination exercised by exceptional Jewish personalities in intellectual and economic spheres, nurtured a strong and entirely new presence of Jews in art and representation. A series of paintings, drawings and etchings (including all Rembrandt’s etchings of Old Testament scenes) illustrates the originality of his vision of the Jews and his innovative and highly personal interpretations of the Scriptures. This singularity may have sprung from his privileged relations with the Sephardic community in Amsterdam, one of whose most prominent personalities was the famous rabbi Menasseh Ben Israel. Until recently, art historians, in the light of an influential corpus of 19th and 20th-century texts, still had a tendency to ‘Judaise’ Rembrandt’s work, and particularly to see many of his depictions of men and old men as portraits of Jews and rabbis. Although this interpretation is now considered too simplistic, the echoes of Rembrandt’s relations with his Jewish environment are nonetheless a fascinating subject.

This exhibition, the most ambitious yet undertaken by the Musée d’art et d’histoire du Judaïsme, benefited from the aid of prestigious museums, particularly the exceptional participation of the Musée de Louvre, who accepted, for the first time, to loan Rembrandt etchings from the collection bequeathed by Baron Edmond de Rothschild.

The Gemäldegalerie in Berlin and the Kimbell Art Museum in Fort Worth, Texas, consented to lend some of Rembrandt’s most compelling portrayals of Jewish figures. The exhibition ends with admirable Disgrace of Haman, in the State Hermitage Museum in Saint Petersburg. Among the other masterpieces on view are paintings by Rembrandt’s teacher Pieter Lastman, his most faithful disciple, Arent de Gelder, and Jan Victors. The description of the founding of the Jewish communities in the Netherlands was made possible by major Jewish collections in Amsterdam, notably the Joods Historisch Museum, the Library of the Universiteit van Amsterdam, the Bibliotheca Rosenthaliana and the Ets Haim – Livraria Montezinos’ Library. Numerous French public and private collection also generously contributed works to this spectacular exhibition.

The exhibition catalogue (352 pages, 280 colour illustrations), co-published with Panama Musées, including texts by eminent specialists. It will be on sale in the Museum Bookshop.

The exhibition is part of “Haut les Pays-Bas!”, a Dutch season in France, and would not have been possible without the support of:
• La Fondation Pro-MAHJ
• La Fondation pour la Mémoire de la Shoah
• La Direction des Affaires culturelles de la région Île-de-France
• L’Institut Alain de Rothschild
• The Dutch Embassy in Paris
• The Gulbenkian Foundation
• And people and organisations preferring to remain anonymous.