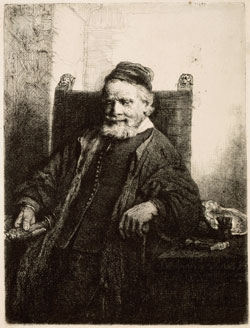 One of the world’s birthday celebrations for Rembrandt is happening in Cincinnati this winter and spring thanks to the remarkable
print collection of the Cincinnati Art Museum. The special exhibition Rembrandt: master printmaker celebrates the 400th anniversary of
Rembrandt van Rijn’s birth in Leiden (The Netherlands) in 1606.

Although better known as a painter, Rembrandt is considered one of the greatest printmakers of all time, producing over three hundred
works. He was one of the first artists to experiment with etching and drypoint techniques. He frequently reworked his printing plates and
used various ink applications to suggest atmosphere. To study Rembrandt’s etchings is to do more than read dates, signatures, classify subject
matter, and number printing states. Visit this exhibition and discover why, across four centuries, he is considered a truly virtuoso printmaker.

Drawn from the Museum’s permanent collection of the artist’s portrait, biblical, genre, and landscape subjects, this exhibition is arranged to
examine Rembrandt’s use of line, light, and drama and to reveal his interpretations of human interrelationships and man’s interaction with
nature as they evolved over his printmaking career.

One of the great storytellers, Rembrandt inventively portrayed biblical scenes from the Old and New Testament. He enlivened the
participants in his narratives, whether singly or in crowds, with a broad range of animated facial expressions and gestures, dynamic
compositions, and dramatic lighting. His gift for depicting emotion is equally apparent in his portraiture. Rembrandt’s early self-portraits
show a fascination with the expression of attitude and role-playing. In his Self portrait leaning on a stone sill of 1639, he presents a confident
artist dressed in exotic garments in the style of the Italian Renaissance masters. His portraits of his contemporaries reveal the psychological
intensity of the sitters through the manipulation of line and light. In addition, his landscapes of the 1640s capture the cottages and vistas
of the immediate Amsterdam countryside with a wealth of natural and human detail. Rembrandt observed nature directly and accurately
captured the natural flat terrain of The Netherlands. In the 1650s, he also explored panoramic views and the play of light and atmosphere.
Regardless of subject matter, each of Rembrandt’s prints exhibit the technical mastery and sensitive portrayals that make him regarded as
history’s master printmaker.