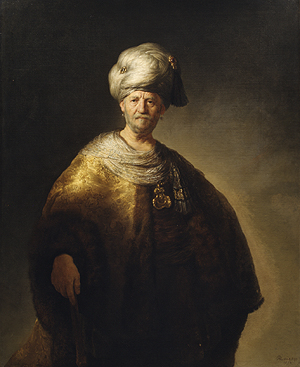 The 400th anniversary of the birth of Rembrandt van Rijn is celebrated at Statens Museum for Kunst with the most comprehensive exhibition ever presented in Denmark about the miller’s son from Leiden who became one of the most important painters art history has ever seen. With a range of remarkable loans of paintings supplemented by the museum’s own collection of prints and drawings, the exhibition spans the Dutch master’s entire life’s work. At the same time Rembrandt’s enormous influence on his contemporaries within this Golden Age of Dutch art is put into perspective through works by his students and artists from his circle. Museums such as the Nationalmuseum in Stockholm, the Mauritshuis in the Hague, The Metropolitan Museum of Art in New York, the National Gallery of Art in Washington, the National Gallery in London, and the Rijksmuseum in Amsterdam all contributed important loans to the exhibition, which presents 100 works in all.

Rembrandt (1606-69) is one of the greatest narrative talents within art history. His highly unusual ability to depict human beings in a wide range of states of mind and dramatic stagings soon gave him the moniker “painter of souls”. In his biblical scenes as well as in his many portraits and self-portraits, Rembrandt imbued his paintings and prints with a life and immediacy without parallel in his own day – and since. His art has an uncompromising and intense realism that remains vibrant and modern here on the other side of the 20th century. The exhibition at Statens Museum for Kunst provides wide-ranging insights into Rembrandt’s imagery and a highly remarkable course of artistic development. Presenting examples of how Rembrandt would interpret the same motif very differently from one painting to the next throughout his career, the exhibition paints a picture of an artist who spent his whole life setting new standards in terms of artistic composition, use of light and shadow, and the ability to involve and engage spectators.

The circle around Rembrandt

The exhibition also directs attention to the group of artists around Rembrandt, including Jan Lievens, Gerard Dou, Ferdinand Bol, Govert Flinck, Willem Drost, Philips Koninck, and Aert de Gelder. Many of these artists – not least Rembrandt’s students – have long represented a largely forgotten chapter of Dutch Golden-Age art. Studies from the last few decades have shown that works formerly attributed to Rembrandt were in fact done by his students, sparking a considerable rise in interest in these artists. The exhibition includes fine examples of the kind of copies and free variations on Rembrandt’s own paintings which his students produced at his workshop in Amsterdam. Many of these student works are very reminiscent of their master’s works, and the exhibition provides a rare insight into how technology such as x-rays and infrared studies can help us tell the genuine Rembrandts from the rest. Apart from showcasing the master’s tremendous influence, this part of the exhibition also shows how several of the students went on to develop their own styles, thereby adding new idioms to the multiform art scene of the Dutch Golden Age.

The exhibition reveals the results of the studies carried out in the museum collections in recent years. Statens Museum for Kunst has studied those of its paintings that have hitherto been rejected as Rembrandts. This new research unearthed sensational news: The museum owns two paintings by the Dutch master. The studies were carried out in close co-operation with an international panel of experts comprising professor dr. Ernst van de Wetering, head of the Rembrandt Research Project; Karin Groen, research technician with the Rembrandt Research Project, David Bomford, senior conservator at the National Gallery in London and Jørgen Wadum, now head of conservation at Statens Museum for Kunst, during the project head conservator at the Mauritshuis in The Hague. Curator Lene Bøgh Rønberg from Statens Museum for Kunst is head of the research project and museum curator Eva de la Fuente Pedersen also participated in the studies. The exhibition includes documentation in the form of a range of technical studies which quite literally look beneath the surface of the paintings in question.

In connection with the exhibition Statens Museum for Kunst publishes a comprehensive book about Rembrandt and his day and about the history of – and most recent studies into – the Rembrandt-related works owned by the museum. The book includes articles by professor Jaap van der Veen, professor Ernst van de Wetering, curator Lene Bøgh Rønberg, head of conservation Jørgen Wadum, curator and senior scholar Eva de la Fuente Pedersen, and curator and senior scholar Jan Garff.
344 pages, richly illustrated
ISBN 87-90096-51-7

The exhibition opens on 2 February in the presence of Her Majesty the Queen and His Royal Highness the Prince Consort.

The exhibition will be opened by Brian Mikkelsen, Minister for Culture.