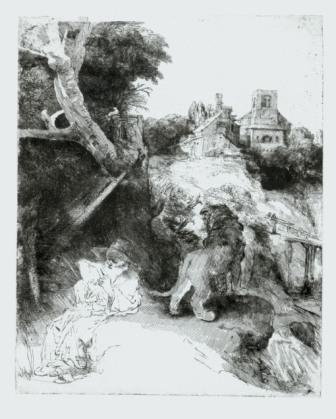 The year 2006 sees the 400th anniversary of the birth of Rembrandt. To mark this occasion, the Staatliche Graphische Sammlung Munich is showing a focussed selection of works taken from its significant and almost complete stock of Rembrandt’s etchings.
The exhibition – to be held in the glass cabinet corridor of the Pinakothek der Moderne – presents a fine cross-section of approximately 300 etchings of singular artistic quality, striking technical sophistication and versatility.

Rembrandt Harmensz van Rijn, born 1606 in Leiden, is the most important etcher in the history of art. His etchings rank on equal terms with his ever-celebrated paintings. In contrast to many of the 17th-century painters in the Netherlands who specialised in one particular theme, the subjects of Rembrandt’s pictures extended to biblical history and mythology, to landscape and genre, to self-portraits and portrait painting – subjects he explored much more in the medium of etching than in painting. More than any other artist, the peintre-graveur Rembrandt exploited to the full the range of technical possibilities specific to the etching process that allowed for changes to the printing plate, thus lending an experimental quality to the production of work in progress by means of rigorous interventions and radical reworkings.

The presentation, divided into 12 chapters and comprising 43 etchings in all, provides an insight into the rich diversity of Rembrandt’s graphic oeuvre.

Particular highlights from Rembrandt’s etchings and from works in the Munich collection include highly revised versions of one and the same plate, executed in dry point. They show scenes from the New Testament and were completed in the latter years of Rembrandt’s life: Ecce Homo, The Three Crosses and The Entombment – biblical revelations of the artist’s interpretative subjectivity which had hitherto remained undiscovered. Rembrandt’s religious imagery is so removed from dogmatic traditions that, in it, “different faiths of the Gospel can come together” (Werner Sumowski).

Etchings allow for alteration and reworking. The operative interventions performed by Rembrandt in his later life are so rigorous, uncompromising – at times even aggressive – and so unique in the history of etching that at first glance one can hardly imagine the same plate being the origin of the different prints. The Staatliche Graphische Sammlung Munich is proud to be in possession of a whole series of capital prints that demonstrate at the highest level precisely this juxtaposition of Rembrandt’s latter and radicalised ideas.