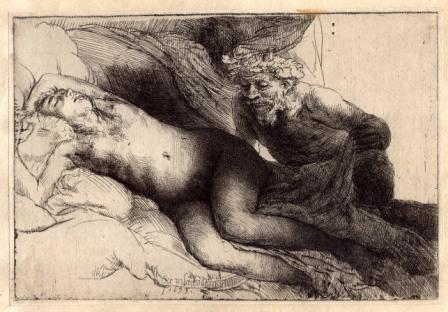 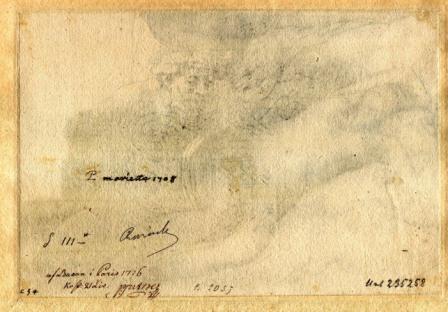 Recto and verso of Rembrandt’s etching
Jupiter and Antiope: the large plate, 1659
St. Petersburg, Hermitage
From the collection of Dmitri Rovinsky,
with his collector’s mark along with those of
Pierre Mariette and Pehr Suther

The Hermitage owns the largest collection of Rembrandt etchings in Russia (one of the most complete in the world) – the collection formed by D.A. Rovinsky which entered the Hermitage in 1897 as a bequest of its owner, who died two years earlier. The exhibition is dedicated to the memory of the collector and includes all the etchings which Rovinsky himself attributed to Rembrandt: 340 prints by Rembrandt and his circle, two portfolios and five printed books.

Dmitrij Aleksandrovich Rovinskij (1824-95) was a Russian lawyer who graduated from St. Petersburg Imperial Law School and made a magnificent career in the state service. He was chief prosecutor of the Moscow region, senator and the most active member of the team of Russian bureaucrats that prepared the great reforms in the country, liberating the serfs as the last country in Europe to do so. It is impossible to overestimate his personal impact on the introduction of jury trials and the abolition of corporal punishmen in Russian law administration.

That was his life as a state official. No less important for Russia was his activity as an independent art historian. It was he who established the foundations of art history as a discipline in 19th-century Russia. His multi-volume art-historical monographs and iconographical dictionaries are still on the working desks of students of Russian art and culture of the 17th to the 19th centuries. They contain thousands and thousands of images, literally saved for the future by him. His greatest passion were prints, all kinds of them – from the masterpieces of Western printmaking to old Russian lubok images(folk prints).

The pearl of his print collection, which numbered about 100,000 items, including 62,000 portrait prints, were his Rembrandts. He started to amass Rembrandt etchings when he was only in his twenties. At the end of his collector’s career he was a happy owner of nearly a thousand prints by Rembrandt and his so-called “school,” including as complete as possible a set of prints by Rembrandt, Bol, Lievens, van Vliet and others. His collection of what he believed to be prints made by Rembrandt himself consists of 626 impressions (today we would say about 600), with an additional 347 prints of Rembrandt’s “school.”

Having witnessed the dispersion of several important Russian private collections, Rovinsky bequeathed his beloved Rembrandts to the Imperial Hermitage museum. They were added to the Hermitage print room in 1895. The other parts of his collection were bequeathed to various public institutions: the St. Petersburg Public Library, the Academy of Fine arts and the Rumjantzev Museum in Moscow.

The provenance list of his Rembrandts is without exaggeration a compendium of the history of print collecting in Europe. To mention only a few former owners, they include Arkadij Alferov, Ploos van Amstel, Sir Edward Estley, the Earl of Aylesford, John Barnard, Duke Buccleuch, Jan Chalon, Wilhelm Drugulin, William Esdaile, Ambroise Firmin-Didot, Richard Fisher, Richard Gutekunst, John Hawkins, George Hibbert, Alexandre Robert-Dumesnil, Pierre Mariette, Nikolaj Mososlov, Pehr Suther and Hermann Weber. Two impressions are of utmost importance for the history of print collecting in Russia, as they bear the earliest (late 18th-century) owner’s inscriptions on a Rembrandt etching in Russian.

Rovinsky spent forty years assembling one of the most complete private collections in the world. He was a constant participant in the European print auctions in the second half of the 19th century. One of his most expensive (if not the most expensive) purchases was an 18th-century fourth state of the portrait of Jan Six. This impression was bought in 1784 by the Swedish collector Pehr Suther for 1300 livres from Basan’s shop in Paris and found its way to Rovinsky through a “friendly purchase” from the heirs of the Russian patron of the arts and collector Alexej Tomilov.

Despite this major achievement, Rovinsky’s foremost place in the history of Rembrandt studies is not as a collector but as the compiler of a monumental catalogue raisonné – his “Atlas” – including 1000 reproductions of Rembrandt’s etchings in all possible states, a record still unsurpassed in our age of electronic technology.