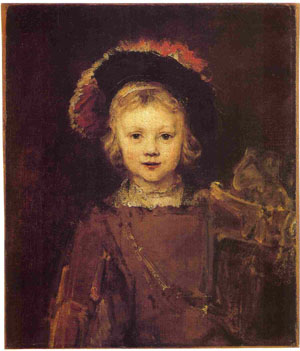 More than forty years after Rembrandt’s painting Portrait of a Boy in Fancy Dress (c. 1655), or “Titus,” made its first Washington appearance, it will return to the National Gallery of Art as part of a new series of loan exchanges between the Gallery and the Norton Simon Foundations in Pasadena, California. This loan is the first in a series of exchanges between the two institutions.

The boy in the painting has often been identified as Rembrandt’s son, Titus, because his face is rendered in sensitive, intimate detail, as if depicting a beloved family member. Although research suggests otherwise, the painting is still often called Titus.

A mysterious animal, perhaps a pet, sits on the boy’s shoulder. Some experts identify it as a parrot, others, a monkey. According to Arthur K. Wheelock, Jr., National Gallery of Art curator of northern baroque painting, it may be that the unfinished, cut-down painting is related to an anecdote described by the Dutch theorist Arnold Houbraken in his early 18th-century biography of Rembrandt: The artist, while painting a group portrait of a husband, his wife, and their children, decided to include an image of his pet monkey because it had just died and he had no other canvas on which to paint it. The family objected and the group portrait was left unfinished. Although Houbraken’s anecdotes may not be entirely accurate, this one may account for the curious animal on the boy’s shoulder and the unfinished character of this remarkable image.

The boy’s pose and costume are reminiscent of those in Hans Holbein the Younger’s Edward VI as a Child, probably 1538, one of the National Gallery of Art’s own masterpieces, and a work that Rembrandt could have seen in Amsterdam in the mid-1640s.