Early 17th century Leiden was the workplace of diverse painters, each of which would prove to be of crucial significance to Dutch Golden Age art. The young Rembrandt and Jan Lievens worked closely together in their formative years as artists and during the time they spent in Leiden they laid the foundations for an oeuvre that would be of global significance. From the outset, they presented themselves through their paintings and etchings as experimental and inquisitive artists. At the same time, Jan van Goyen and the maritime artist Jan Porcellis were developing as pioneers of Dutch landscape painting. Leiden also gained prominence through painters such as Jan Davidsz, de Heem and David Bailly who focused on vanitas still lifes, which dealt with the concept of transience. The masterpieces of these great artists can be admired at the exhibition. 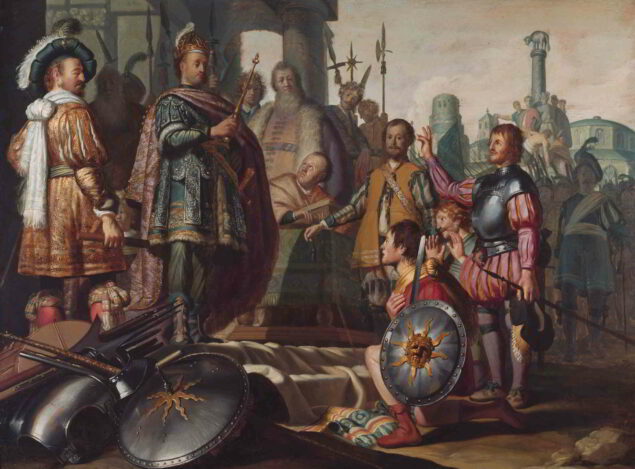 Gerrit Dou was Rembrandt’s most important student. After leaving his mentor for Amsterdam in 1632, he concentrated on extremely finely detailed cabinet paintings. He was inspired by Rembrandt and developed into the founder of the Leidse Fijnschilders movement of artists, who, unlike Rembrandt and Vermeer, managed to acquire international renown during their lifetime. No collection of royal standing was complete without works by Fijnschilders such as Frans van Mieris, Pieter van Slingelandt or Godfried Schalcken. The collection of Fijnschilders at Museum De Lakenhal has recently grown into one of the most important of its kind.

Two of the earliest known works of Rembrandt, A Peddler Selling Spectacles (ca. 1624) and History Painting (1626) are at the heart of the exhibition. A Peddler Selling Spectacles is part of a series portraying the five senses which Rembrandt painted when he was about seventeen. Although Rembrandt is clearly experimenting with technique and perspective, this painting is a sign of the attention to the chiaroscuro and virtuosity of brushstrokes that we would see in Rembrandt’s later works for which he would become famous. History Painting, is an early example of how Rembrandt portrays himself in a painting. In collaboration with the Rijksmuseum, the History Painting has been restored in the Amsterdam museum’s studio, bringing Rembrandt’s color palette back to its original glory.

In 2019 the 350th anniversary of Rembrandt van Rijn’s death will be honoured with numerous events worldwide. For all events see www.codart.nl/rembrandt-2019