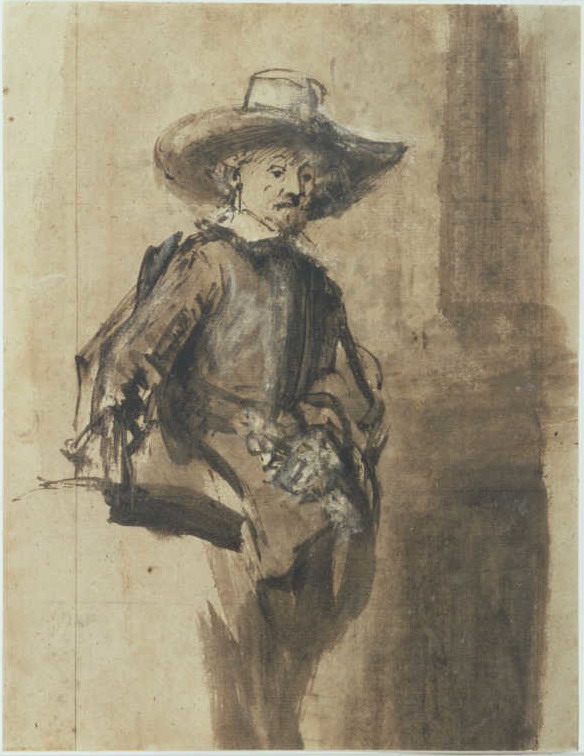 The walls of Rotterdam’s Museum Boijmans Van Beuningen are adorned with three world-famous oil paintings of Rembrandt: The Portrait of Aletta Adriaensdochter, The Concord of the State and Titus at His Desk. Interestingly enough, the museum’s collection of Rembrandt drawings and etchings are not nearly as well-known. These works are kept at the Print Room, preserved in boxes under special conditions required by light-sensitive materials such as paper, and are only exposed to daylight upon the request of an art connoisseur or a researcher working on the subject. They are occasionally displayed under dim light at the museum or on loan, for no longer than three months at a time, whereupon they are promptly returned to their secure and dark environment.

Rembrandt and His Circle/DRAWINGS exhibition is comprised of 99 drawings, 65 of which, including Rembrandt’s, were a part of the famous Koenigs Collection. Acquired by the Rotterdam shipowner D.G. van Beuningen in 1940, the collection was then donated to the Boijmans Van Beuningen Museum, thereby ranking this institution as the second largest holder of Rembrandt drawings in Netherlands. Since 1988, however, these works of Rembrandt and his school had not been displayed collectively until the exhibition held earlier this year at the Museum Boijmans Van Beuningen.

Thus, to have the drawings of Rembrandt and his circle come to light in Istanbul, shortly after Rotterdam, is a noteworthy event. It is particularly meaningful that this exhibition coincides with the 400th anniversary of Rembrandt’s year of birth.

Rembrandt and His Circle/DRAWINGS welcomes us into the enchanted world of drawing – the purest and most basic form of painting – through the works of a great European master and his school.