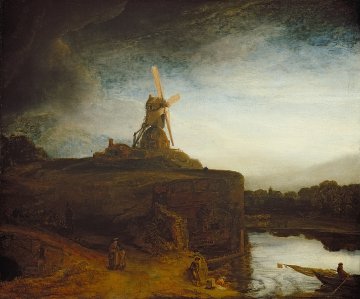 On 15th July 2006 Rembrandt Harmensz van Rijn was born in Leiden. The Staatliche Museen Kassel, whose collection of old masters consists of significant works of Rembrandt, are planning at Museum Schloß Wilhelmshöhe different exhibitions in 2006, honouring his 400th birthday.

The series of events will start with the most celebrated work from the Kassel collection: Jacob’s blessing (1656). The exhibition Rembrandt in contrast (4 November 2005–5 February 2006) shall reveal the extreme poles of Rembrandt’s historical painting by contrasting this late masterpiece with the early work The blinding of Samson (1636) from the Frankfurt Städel. Along with other paintings, graphics and drawings, the unconventional visualisations of an extraordinary artist thus become apparent.

Landgrave Wilhelm VIII, founder of the gallery, listed in the inventory from 1749 et sqq. not less than 34 paintings made by Rembrandt; today we assume that at least twelve paintings from the Kassel collection are by the masters own hand. The planned exhibition 34 paintings of Rembrandt in Kassel! (19 May-20 August 2006) uses the former attributions as an opportunity to find out what characterised an autographic “Rembrandt” in the opinion of an 18th century art connoisseur. The question might be: What makes up a “Rembrandt”?

The third project of the Staatlichen Museen Kassel will be presented in collaboration with De Lakenhal in Leiden: In the exhibition Rembrandt’s landscapes (23 June-17 September 2006) the few, but significant landscape paintings by Rembrandt will be brought together with works by his closest pupils. The vast autonomy of the master’s landscapes should be surprising. Afterwards the exhibition will be seen in De Lakenhal in Leiden.