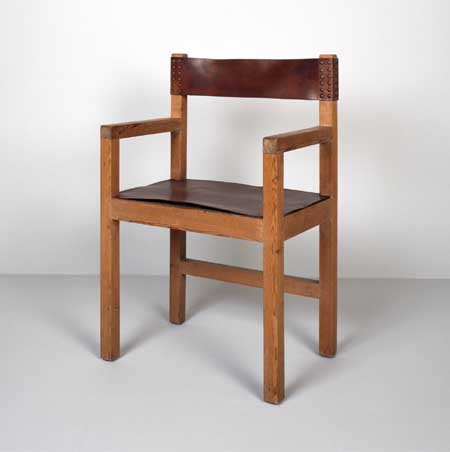 Rietveld’s Slender Space Sculptures and other creations of the avant-garde (Centraal Museum Utrecht from 5 July to 26 October) bears witness to the enthusiasm and excited experimentation of a group of Dutch artists in the first quarter of the 20th century. At the heart of this exhibition is the Rietveld Collection, which comprises not only work by the cabinet-maker and architect Gerrit Rietved, but also by Theo van Doesburg, Bart van der Leck, J.J.P. Oud, Hendrik Berlage, Erich Wichman, and many others – friends, colleagues and teachers.

Time for something new

One indirect consequence of the bourgeois values of the late 19th century was a quest for a society that reflected genuinely collective ideals. In the Netherlands, passionate, dedicated artists, architects and designers sought a new humanity, a new civilisation and a universal formal idiom. After endless experimentation, this process led to the geometrical abstraction of De Stijl.

From the figurative to the abstract

Rietveld’s Slender Space Sculptures and other creations of the avant-garde shows how this geometrical abstract work developed from its beginnings in figurative art. The earliest paintings and objects were inspired by the art and design of an idealised past: Ancient Egypt or the early Middle Ages. The middle room covers the development of cubism and expressionism in the Netherlands. Through the extreme distortion of form, these styles hoped to depict a ‘higher’ reality. By breaking down a figure into planes and lines, artists created a purely abstract idiom. The third room shows De Stijl at its peak, when Rietveld no longer used plain wood for his furniture, but painted it red, yellow, black, white and grey. In some of his chairs and tables, he also used asymmetry. These ideas were adapted by a variety of artists and architects. The entresol is devoted entirely to the absolute climax in this phase of Rietveld’s work: the Rietveld Schröder House. Models, architectural drawings, short films and a range of articles set out Rietveld’s ideas on the perception and experience of space, and also the enormous impact that this house had – both nationally and internationally – when it was built in the 1920s.

The exhibition has been designed by devrijerenvandongen.

Rietveld’s Slender Space Sculpture and other creations of the avant-garde is the first phase of the new Museum and Business Plan, which was approved by the city council in April 2008. The plan comprises a variety of distinct public-oriented themes. This exhibition, with its world-class masterpieces, fits the Centraal Museum Rietveld theme.