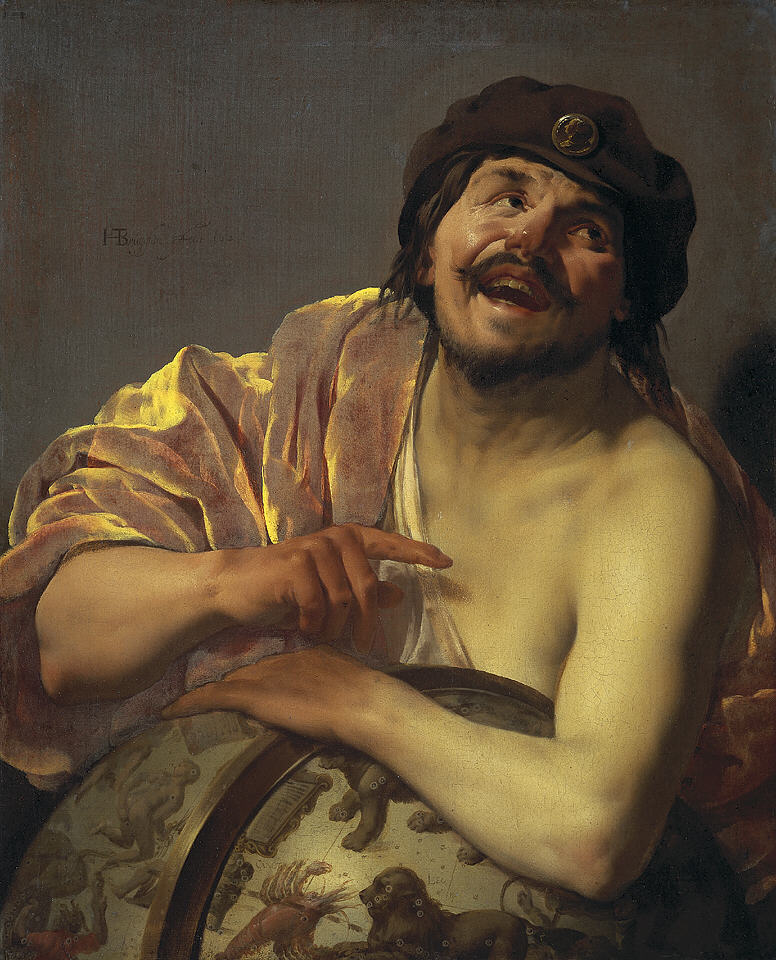 The largest renovation program in the history of the Rijksmuseum Amsterdam got underway in December 2003. The Rijksmuseum has found ways of continuing to show its permanent collection to large numbers of people while the renovation work is being carried out. A part of the museum itself will remain open and present highlights from the Golden Age in a major exhibition entitled The Masterpieces. At the same time, the Rijksmuseum is presenting parts of its collection as long-term loans in ten museums in the Netherlands, Belgium and Germany under the title Rijksmuseum at/in/on the…. In most cases the items will be on loan for the duration of the renovation work at the Rijksmuseum.

Stunning sixteenth and seventeenth-century paintings from the Rijksmuseum Amsterdam’s collection will be on show in the galleries of the Koninklijk Museum voor Schone Kunsten Antwerpen from October 9th. Virtuoso nude paintings by mannerists such as Bartholomeus Spranger, Cornelis van Haarlem and Hendrick Goltzius will be shown under the title Rijksmuseum on the Scheldt. Attention will also be paid to the painters of light and shade, influenced by Caravaggio. The chosen works will include masterpieces by the caravaggists Hendrick ter Brugghen, Dirck van Baburen and Michaël Sweerts. These paintings from Amsterdam will be juxtaposed with paintings in Antwerp ownership. Mannerism and caravaggism had a profound influence on the development of baroque art in the Low Countries and this encounter between North and South promises to be an event that no one should miss.

Visitors were recently driven from the Rijksmuseum by construction workers wielding drills. The treasure-house of the Netherlands is undergoing a veritable transformation in a bid to make the museum more attractive to the twenty-first-century visitor. Only a minority of the paintings, sculptures, examples of the applied arts and objects from Dutch history are currently on show in the Philips Wing. As it would be a great pity to put so many of the other first-rate works of art into storage for years, the management of the museum came up with the idea of housing groups of works in various local museums in the Netherlands. The Koninklijk Museum voor Schone Kunsten in Antwerp was the only museum in Belgium to be approached by the Rijksmuseum with the question of whether a group of works could be temporarily housed on the banks of the River Scheldt. A project was born.

It was unanimously agreed that these works should complement the Antwerp collection, which contains a large number of paintings by Flemish masters from the fifteenth to the twentieth centuries (Van Eyck, Metsijs, Rubens, Van Dyck and Ensor) and a small but exquisite group of Dutch paintings (Hals, Ter Borch, Van Gogh, Breitner and Appel). After consultation, two categories were chosen which are poorly represented in the Antwerp collection: mannerists and caravaggists. The chosen works will be supplemented by a number of Dutch and Flemish portrait paintings from the Golden Age. The Rijksmuseum on the Scheldt will consist of some thirty works shown together with a number of relevant, Antwerp-owned pieces. The paintings will remain in Antwerp up to the end of 2006 at least. Three spacious and consecutive galleries (F, G and E) on the first floor of the KMSKA have been reserved and refurbished for the Rijksmuseum on the Scheldt. These galleries are on the chronological route taken by visitors to the museum.

The first gallery is devoted to the mannerists. The term ‘mannerism’ is used to refer to the period in the history of art that follows on from the Renaissance. Around the year 1520 a number of Italian artists strove to rival their predecessors – famous masters such as Raphael and Michelangelo. Some even tried to surpass certain aspects of the style (the ‘maniera’ or manner) of these artists. They looked, for example, at the muscular bodies and complicated poses in the Sistine Chapel and added a little extra, which resulted in exaggerated proportions and twists of the body. These physical forms are far removed from the ideal human proportions artists from the early Renaissance strove for. Moreover, unexpected colour combinations appeared on the palettes of these exponents of mannerism. The ‘maniera’ of these artists became an objective in itself, which is how their art acquired its name.

Mannerism spread to the rest of Europe in the second half of the sixteenth century. The Antwerp-born artist Bartholomeus Spranger played an important role in this. In Rome he encountered the new style which he further developed and updated as court painter in Prague. Not a single work by Spranger has remained in Belgium and so we regard ourselves as highly fortunate to be able to show a very fine work by him, Venus and Adonis, on the banks of the River Scheldt. Mannerism became known in the north via Spranger’s contacts with Haarlem artists such as Hendrick Goltzius and Cornelis van Haarlem. Works by the latter include the absolutely spectacular Massacre of the Innocents whose scale, shortened nudes and gruesome details leave no one unmoved. This canvas is seen as a manifesto of the artistic trend. In 1613 Rubens is believed to have paid a visit to his fellow artists in Haarlem. A work like the Massacre of the Innocents must have made a huge impression on him. It is interesting to note how powerful compositions by Goltzius such as Lot and his daughters have a close affinity with early ‘classicist’ works by Rubens, such as the Venus Frigida in the Antwerp collection. The other mannerist masterpieces include paintings by Jacob de Backer, Abraham Bloemaert, Frans Francken II, Jacob de Gheyn II, Pieter Isaacsz, Karel van Mander and Joachim Wtewael.

The visitor steps from the world of mannerism into a smaller room where Dutch and Flemish portraits are on show. Hanging alongside several important works from the museum’s own collection (e.g. Jan Gaspar Gevartius by Peter Paul Rubens, Abraham Grapheus by Cornelis de Vos and Pieter de la Court and his wife by Ferdinand Bol), will be several portraits from the Rijksmuseum, including another very fine work by Bol, the Three Overseers of the Leper Asylum in Amsterdam, the portrait of Mary Stuart dressed in white satin by Bartholomeus van der Helst and the Leeuw Family, a beautiful group portrait by Abraham van den Tempel.

Furthermore, an important work from the museum’s own collection is expected to return to this gallery probably in February 2005: the magisterial Stephanus Geeraerdts by Frans Hals. The painting is currently undergoing restoration at the Restoration Foundation, Limburg workshop in Maastricht, during which its badly yellowed layer of varnish will be removed.

The third gallery contains work by Dutch artists who were influenced by the paintings of Michelangelo Merisi da Caravaggio (1571-1610), an Italian baroque painter who was known above all for his dramatic contrasts of light and shade and his naturalistic reproduction of the ordinary man in the street. He often used workers and street urchins as his models. A greater contrast with the affected and intellectual art of the mannerists is hardly conceivable. Caravaggio drew both admiration and criticism from his contemporaries. Around the year 1620 there were many imitations of his expressive style, particularly in Utrecht (Hendrick ter Brugghen, Gerard van Honthorst and Dirck van Baburen), but his influence was also apparent in the Southern Netherlands (Theodoor Rombouts, Gerard Seghers and Theodoor van Loon). These ‘caravaggists’ borrowed the Italian painter’s chiaroscuro and realism. As their subjects, they chose characters pulling faces or used models with weather-beaten faces. These characters almost filled the entire canvas and were strongly lit from the side.

A marvellous example of Caravaggism is the portrait of the Greek sage Democritus by Ter Brugghen, the companion piece of the philosopher Heraclitus. The stupidity of the people merely arouses the derision of the one philosopher, while it depresses the other. For a painter it was a challenge to express different states of mind and Ter Brugghen did this extremely well. In this gallery we are seizing the opportunity to juxtapose the Utrecht caravaggists and masters such as Paulus Bor, Leonard Bramer and Karel Dujardin with their Flemish counterparts. For example, an altarpiece from the museum’s own collection is being shown, which visitors rarely get to see because it is usually hanging in a depot somewhere: St Theresa in Ecstasy by Gerard Seghers. It is a very severe-looking painting reminiscent of works by Spanish masters such as Ribalta and Zurbarán. Another first for the public is the magnificent Old Testament Scene by Theodoor van Loon. This painting probably dates from the years Van Loon spent in Rome and was recently given to the museum as a permanent loan by an American collector. When the painting was cleaned and restored in September 2004, new elements came to light. These discoveries have made it necessary to revise earlier identifications of the subject (in 2003, the work was identified as the Birth of Samson).
Among the caravaggists going on show in Antwerp is a fine group of works by the Brussels-born painter Michaël Sweerts, who is not represented in any Belgian collection. More speculation than fact surrounds Sweerts’ life, and his mysterious oeuvre partly accounts for the cult status this master has acquired. In The Card Players, several unsuspecting men are distracted from their game by a fight, while a boy steals one of the cards. The painting is the companion piece to an Artists’ Studio, where draughtsmen are busy working. It is possible that the two works represent the contrast between Accidie or Otio (indolence) and Industria. Sweerts painted them in Rome, where he spent the years 1646 to 1651.

The selection of caravaggists also includes Rembrandt. This may seem strange, but it is not. Though Rembrandt never travelled to Italy and he never saw Caravaggio’s masterpieces first hand, he must have been familiar with paintings by contemporaries who were influenced by the new artistic trend. In his turn he assimilated that influence into his own work as a personal idiom. Rembrandt’s impressive Peter’s Denial is being loaned to Antwerp for six months, providing visitors with a unique opportunity to view Rembrandt from a different perspective.

With this painting Rembrandt portrayed a theme that was a great favourite in caravaggist circles. A maidservant has asked Peter if he knows Jesus. Two soldiers are waiting for his answer. On the right, in the background, Christ and several bystanders turn to listen. Rembrandt concentrates the attention on Peter’s bewildered face by lighting it from a hidden light source. At the same time the presence of Christ in the painting denotes the definitive character of the denial. Here Rembrandt painted with brush and palette-knife, a pioneering technique which later had a great influence on the way masters such as Courbet and Ensor worked. Many zones are scarcely developed at all. This is highly typical of Rembrandt’s late historical paintings.