Delft Blue: the iconic Dutch earthenware is known all over the world. It remains popular to this day, and although we think we know its history, we continue to discover new things about it. Many of the greatest masterpieces of Delftware are in collections abroad, and so are seldom, if ever, seen in the Netherlands. That is all about to change this spring, however, as Kunstmuseum Den Haag brings many of them together for the first time in an exhibition that will include top items from Hampton Court Palace and the V&A in London. The public will be able to discover some of the finest Delftware ever commissioned: the Royal Blue made for William and Mary.

To celebrate the 400th anniversary of Delftware, and as an ode to the friendship between Britain and the Netherlands, this spring Kunstmuseum Den Haag will present a story of Orange in blue and white, a tale of fragile diplomacy and breathtaking grandeur. Royal Blue will show how a 17th-century English queen continues to color the Netherlands’ identity today.

From tall flower pyramids to garden vases and preserve dishes: in the late seventeenth century the potteries of Delft made the most beautiful tin-glazed earthenware in Europe. The heyday of Delftware coincided with the reign of William III (1650-1702) and Mary II Stuart (1662-1695). They collected both Chinese porcelain and the attractive, refined ceramic ware from Delft. Indeed, they were leading champions of the earthenware made in Delft. Mary, in particular, was a true ambassador for Delftware, and she commissioned special pieces from De Grieksche A pottery for her own collection. The exhibition will focus on the period 1689-1702, when stadtholder William III and Mary II Stuart were also king and queen of England, Scotland and Ireland. Royal Blue will introduce visitors to the rich cultural heritage that grew out of the ties between the Netherlands and Britain in the seventeenth century. 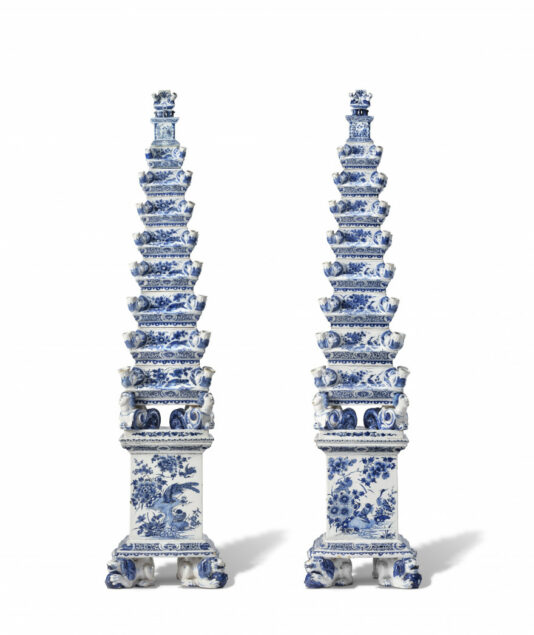 Chinese porcelain was occasionally seen in Europe from the fifteenth century onwards, but it was rare and costly. The United East India Company’s trade with Asia in the seventeenth century increased imports to the Netherlands, and ‘China’ became popular with collectors. Mary’s grandmother, Amalia van Solms, had a lot of porcelain on display in her residences. Mary, too, was an avid collector, and there were porcelain objects in every one of her eight palaces in the Dutch Republic. But she also collected Delftware. She admired the imitations of Chinese blue-and-white porcelain made by the potteries in Delft, which had succeeded in producing fine imitations of the shapes, colors and decorations of porcelain. Fragments of the earliest blue-and-white ceramics collected by Mary have survived at Het Loo Palace.

The exhibition has come about thanks to a unique collaboration with Het Loo Palace, which William and Mary had built in Apeldoorn in 1685-1686 for use on hunting trips. The decorative arts, including ceramics, played an important role in the interior design of the palace. No complete Delftware objects have survived there, but the many fragments dug up in the gardens of Het Loo, and the similar items purchased on this basis, give a unique glimpse of the kind of Delftware that once graced the halls and chambers of the palace. These archaeological finds are quite extraordinary as they are the only surviving examples of Delftware owned by William and Mary anywhere in the world, and the earliest examples of royal Delftware in the Netherlands. Het Loo Palace is currently undergoing renovations and alterations, so its unique collection of Delftware is temporarily in The Hague. The baroque gardens of Het Loo will be open again from 31 March 2020, and the Delftware garden vases based on the seventeenth-century ones owned by the royal couple will be displayed there in their original setting from 1 June.

Mary probably had a role in the creation and development of some exceptional pieces of Delftware. Decorations featuring crowns, the Orange-Nassau family coat of arms, and the monograms of William and Mary lend royal allure to the Delftware produced after they were crowned King and Queen of England, Scotland and Ireland. The influence of court-appointed designer Daniel Marot (1660/61-1752) can clearly be seen in this ‘Royal Blue’. Many other European monarchs followed Mary’s example in ordering personalized earthenware items from Delft.
Several of Mary’s flower pyramids from England are now kept at Hampton Court Palace. Mary had a pavilion in the garden there, known as the Water Gallery, which was decorated with Delftware. Besides highlights from Hampton Court Palace, the exhibition will also reunite the Delftware wall tiles from the Water Gallery which are currently in the collections of five different museums. Loans from Het Loo Palace, the Rijksmuseum, Museum Prinsenhof Delft and many international museums will bring William and Mary’s Delftware together again for the first time.

Two magnificent pieces from Kunstmuseum Den Haag’s own collection – Delft Blue vases in the shape of William and Mary – will form the centerpiece of the exhibition. They were separated for 40 years in two different private collections until the museum reunited them in 2015. In Royal Blue they symbolism the important role the couple played in popularizing Delft Blue. The commissions that De Grieksche A is known to have produced for Mary as queen are part of the Netherlands’ internationally renowned cultural heritage. They are still imitated in contemporary royal commissions, like the new state banquet dinner service ‘Blossom Panache’ made in 2017, the design sketches and several pieces of which will be included in the exhibition. And also in an installation inspired by the wall coverings made for the Blue Drawing Room at Huis ten Bosch Palace in 2019.’