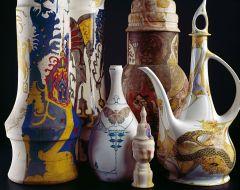 The Rozenburg Royal Delftware Factory (1883-1917) produced internationally renowned pottery. The glory days of the Hague factory are very much associated with the designer Theodoor Colenbrander and its director Jurriaan Kok. But the Gemeentemuseum’s exhibition Rozenburg: Delftware from Hague circles does more than explore their creative years. The exhibition and the accompanying publication seek to paint a complete picture of the factory that was so very much part of Hague artistic circles.

Rozenburg was set up as a pottery factory in 1883 by the German Wilhelm Wolff Freiherr von Gudenberg. The entrepreneur’s original aim was to produce traditional Delft pottery, but he was soon captivated by contemporary artistic designs. He found an ally in the shape of the eccentric T.A.C. Colenbrander (1841-1930), who designed exotic vases and dishes with whimsical, bright designs. It was in the years that Rozenburg’s shareholders included the likes of the marine painter H.W. Mesdag and the poet and literary critic Carel Vosmaer, and its tile painters numbered up-and-coming artists like Willem de Zwart and W.B. van Horssen. Those early days were a flamboyant time, but the factory struggled to make a profit.

In the 1890s, Rozenburg tacked between art and commerce, between ceramics for the construction industry and pottery utensils. The factory produced tile tableaux for the Stedelijk Museum in Amsterdam and was very much inspired by the British arts and crafts style. Vases, mantel clocks, dishes and jugs were decorated with rural idylls populated by waterfowl and frogs, sunflowers and poppies. The scenes were devised by master painters and their apprentices. Inspiration and expertise were derived from field trips, the Hague art academy or volumes of illustrations from all over the world.

And then, after years of experimentation, director Jurriaan Kok (1861-1919) suddenly launched an eggshell porcelain that was so delicate and so thin that it was almost unusable. Teapot lids resembled flakes of foam and handles rose up out of translucent pots like wayward tendrils. Cheerful, robust decorations made way for ethereal, stylised scenes with aviary birds and thistle branches. At the World Exhibition in Paris (1900) the new designs were an instant hit and the factory enjoyed some very profitable years. But massive investment, increasing plagiarism and a lack of innovative designers began to take its toll. From 1904 Rozenburg shifted its focus to the production of building materials. The factory launched glazed stoneware, a weatherproof material whose smooth properties for many years inspired the artist Jan Toorop, a good friend of Jurriaan Kok. The Gemeentemuseum Den Haag had close ties with Rozenburg right from the early days. The works first bought by the museum were acquired by its then director Hendrik van Gelder in 1913 and 1917. That last year marked the end of the factory. It fell victim to declining sales and a sharp increase in the price of raw materials as the First World War loomed.

The exhibition will be accompanied by an extensive, copiously-illustrated Dutch-language catalogue that, like the exhibition, will focus not just on the most creative years of Colenbrander and Kok, but also shed light on Rozenburg’s lesser-known history.