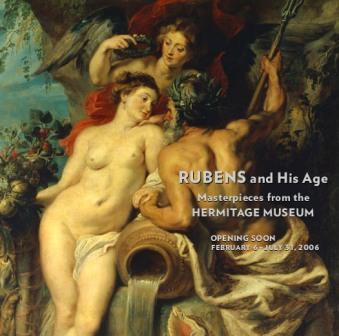 Rubens and his age: masterpieces from the Hermitage Museum brings to life the remarkable history and culture of 17th-century Flanders. Governed by the Spanish Hapsburg Archduchess Isabella Clara Eugenia (1566–1633) and her husband Archduke Albert (1559–1621), Flanders was a predominantly Catholic country that included most of present-day Belgium, a southern part of the Netherlands, and a small area of northern France; Antwerp was the hub of its artistic activities.

The exhibition centers around Peter Paul Rubens (1577–1640), whose enormous talent and versatility made him one of the preeminent and most creative artists of the 17th century. Rubens’s engagement with all manner of artistic pursuits — painting, drawing, printmaking, book illustration, tapestry design, sculpture, and architecture — earned him considerable wealth, property, rank, and international acclaim, not only in the arts but also as an active participant in the world of politics and diplomacy. This exhibition features nearly fifty masterworks of the Hermitage’s collection of Flemish baroque paintings and decorative arts, many of which were owned, designed, or commissioned by Rubens himself, and explores Rubens’s artistic influence in 17th-century Flanders and beyond. Organized by theme — allegory and mythology, religion, genre and landscape, and portraits — Rubens and his age also features the work of the maestro’s pupils, Anthony van Dyck (1599–1641) and Jacob Jordaens (1593–1678).

The State Hermitage Museum, St. Petersburg, founded in 1764, houses more than three million works of art. Russian Empress Catherine the Great (1729–1796) acquired much of the Hermitage’s vast collection, including most of the works of art in this exhibition, during her nearly three-and-a-half decade reign. Catherine’s advisors scoured Europe in search of the most prestigious art collections, and with her untold riches, she purchased collections en masse. Her residence, the immense Winter Palace, now forms the core of the Hermitage Museum, one of the finest picture galleries in Europe. More than a pastime, Catherine’s collecting was a vital component of official Russian policy. Her sensational purchases were intended to demonstrate Russia’s wealth and prosperity to the world and reinforced the established opinion abroad of Catherine as “the Minerva of the North,” the most enlightened ruler in the entire Western world.

Baroque art, characterized by its harmonious balance of color, monumentality, dynamic movement, and exaggerated naturalism, had its origins in the Catholic Church, which exercised religious propaganda through overt displays of artistic virtuosity. The artistic movement revolted against a prevailing classical style considered too reasonable and static. Its resulting, unprecedented force addressed the senses directly and reached the intellect through the emotions rather than through reason. Upon his return from Italy in 1608, Rubens introduced baroque art to Northern Europe in a blend of Flemish realism and Italian Grand Manner that radically altered traditional composition. Rubens possessed an encyclopedic knowledge of religious symbolism and classical mythology. After studying masterpieces of the Italian Renaissance and recently unearthed sculptures of classical antiquity, Rubens asserted that corporeal depiction should closely resemble human anatomy and developed his signature portrayal of fleshy, robust nudes. His greatest innovation, however, was the expression of vitality achieved by introducing a dynamic line through his compositional groupings, resulting in figures that appear to move and twist. His religious and secular portraits and landscapes all bear witness to his highly developed ability to exploit the colors of the Venetian master, Titian, whose paintings he had seen during his diplomatic envoys to Madrid and London.