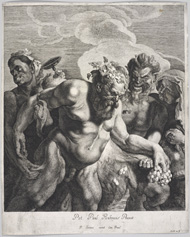 Peter Paul Rubens employed a small army of artists to make prints of the paintings he produced, thus increasing his reach and fame throughout Europe. This exhibition explores the close collaboration between Rubens and his printmakers, and his manipulation of the printed media. Not satisfied with making mere reproductions of his pictures, Rubens encouraged his artists to modify his compositions, which he also often reworked. In attempting to meet Rubens’ strict demands, his printmakers contributed significantly to the development of Western printmaking techniques. The display’s key theme of collaboration offers a supporting dialogue to the exhibition Rubens and Brueghel: a working friendship.