Please note: the end date of the exhibition has yet to be confirmed. Please refer to the museum’s website for the most up-to-date information.

Traveling was part of everyday life for artists in the seventeenth-century, as they had to present  their work to their clients. If you wanted to know about the production of competing artists, one could consult black and white engravings or travel to the depicted locations. Rubens preferred the latter. After completing his training, he went on an eight-year trip to Italy. He was appointed court painter to the Duke of Mantua and was asked to travel to the court of Philip II. It was not his last meeting with a Spanish king. Philip’s grandson Philip IV, a hierarchic man, was skeptical when his great aunt, Governor Isabella Clara Eugenia, recommended the middle-class artist Rubens as diplomat to the Spanish crown.

He was greatly mistaken. Not only was Rubens on speaking terms with the Spanish king, he also saw Charles I and Louis XIII, as well as Maria de Medici. It is very clear from Rubens’ numerous letters that he not only moved around these courts, but that he was interested in the countries and their people, and in particular in the cities and their art treasures.

On our journey through Europe we get to know important stages in the life of Peter Paul Rubens, as well as the cities he visited and the people he met. What did Paris, London, Rome, and the residence of the Spanish governors in the southern Netherlands of Brussels look like? How many inhabitants were there and which sights do we still admire today? At the start of the seventeenth century Rome was different from what we see today, no columns in the facade of St. Peter’s Basilica, no baldachin, no Fountain of the Four Rivers and no Spanish steps. 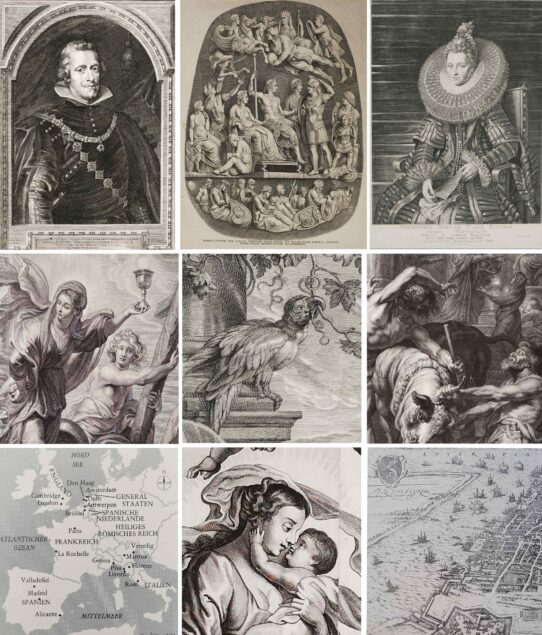 Montage of several works shown in the exhibition