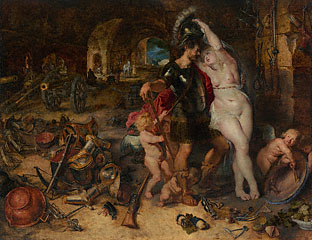 It is relatively unknown that many Dutch and Flemish paintings from the 17th century were painted by more than one artist. They are often outstandingly beautiful works of art, featuring some of the zeniths in the oeuvres of the individual masters. The collective paintings of the leading Antwerp artists Jan Brueghel the Elder and Peter Paul Rubens are true collector’s items; they are some of the best works in this genre. The Mauritshuis collection also includes an exquisite example The garden of Eden with the fall of man.