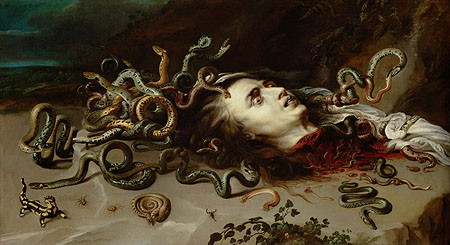 The exhibition in the Apollo Hall of the Winter Palace presents one work by the celebrated Flemish artist Peter Paul Rubens (1577-1640). The canvas of the Head of Medusa from the Kunsthistorisches Museum is perhaps the earliest original treatment of a rare subject in 16th – 17th century Western European art. The depiction of the severed head of Medusa, “entwined by snakes,” was for artists of that period a very handy way to demonstrate their ability to instill fear in the spectator. Rubens was entirely successful in this endeavor.

Ever since Antiquity, depictions of the head of Medusa with protruding tongue, exposed teeth and snake-shaped hair were to be seen on soldiers’ shields (bronze and wooden) located at the entrance to buildings as a talisman warding off danger. In decorative and applied art of 16th century Western Europe, such depictions were disseminated to a certain extent. But only two artists of that period dared to deal with this subject and place the head of Medusa on round wooden convex shields. The first was Leonardo da Vinci, whose picture was in the Medici collection in Florence. The second was Michelangelo da Caravaggio, who painted a wooden shield “inspiring terror and showing the head of Medusa with hair in the form of snakes.”

Possibly these experiments by Italian masters prompted Rubens to paint his own work, though it cannot be ruled out that the theme of the painting was assigned by an art patron for his collection. Rubens’ Head of Medusa differs from Caravaggio’s work in terms of both composition and the motif selected. Whereas Caravaggio showed the Gorgon at the moment of her final cry before death, Rubens captured on canvas the head of a woman already dead. Against the background of a gloomy landscape with low clouds we see the brightly illuminated head of Medusa lying on a stony ledge almost devoid of vegetation. Her deathly pale face with frozen gaze, glassy eyes and half-open mouth are filled with an expression of horror. Although Medusa is dead, her repulsive snakelike hair continues to live: it stirs, twists, shakes, intertwine, forming moving rings and balls. The drops of blood which have fallen to the ground give rise to newborn small snakes. The insects and crawling animals on the painting are united in the composition obviously because from time immemorial they around fear and repulsion in men. In many books on 16th and 17th century symbols, they are associated with the world of the devil and with sin. That is most likely the sense they convey in Rubens painting as well: they relate directly to the central image of the Gorgon Medusa.

All of the beings presented in the painting are executed with great artistry, all of which attests to the serious attitude shown in that age to everything unusual in the world of living nature. Rubens himself was a major collector and such interests were not strange for him. Like many of his compatriots, alongside works of art he collected natural rarities (for example, sea shells). In all likelihood, the painting of the Head of Medusa was created by Rubens for a connoisseur of both paintings and natural objects, the owner of a “study of rarities.”

The painting is dated at around 1617-1618 on the basis of the stylistic resemblance in the execution of the head of Medusa to the manner of depicting demons in Rubens’ painting of The Miracle of St Ignatius Loyola (Kunsthistorisches Museum, Vienna) done in 1617.