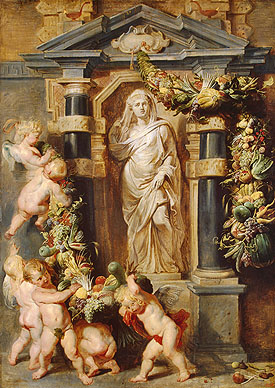 The exhibition in the New Hermitage (Room Nr 233) presents two versions of a single composition by the outstanding Flemish artist Pieter Paul Rubens. The first has been in the Hermitage ever since 1768, when it was purchased in Brussels for Catherine the Great together with the collection of Count Karl Kobenzl. The second version once was found in the Filippi collection in Hamburg, but now belongs to the Swiss collector Herman Beyeler.

The Hermitage Ceres was signed by Rubens together with his friend of many years and fellow artist Frans Snyders, who painted the garland of fruit and it is usually dated no later than 1615. This small format painting library belongs to the period of so-called Classicism in the career of the famous Flemish artist when his works were noted for a clear compositional structure and unusual plasticity of the figures, as well as clear and radiant colors. In this period Rubens especially frequently sought inspiration in the images of the art of Antiquity. In the given instance, the motif of the painting was provided by a Hellenistic statue of Ceres, the goddess of vegetation and earthly fertility, which the painter saw in the Borghese collection in Rome. Having chosen a concrete historical monument as the central image of the painting, Rubens sought within it a living model that would serve as a prototype. He would change the contours somewhat and the pose of the marble goddess, filling the static form with movement. He went even further in this direction in his depiction of the small, frolicsome cherubs in the foreground of the painting. Taking as his point of departure the images of boys in Hellenistic decorative fountain sculptures, he shows a real child’s body with all its inimitably individual features. The garland of plucked fruits created by Snyders which decorates the niche containing the statue of the Antique goddess becomes an expression of the sumptuous flourishing of nature itself. The embodiment of healthy and full-bodied life, which was the main goal of Rubens’ art, is completely expressed in the painting.

As confirmation of the success enjoyed by the Statue of Ceres, one can cite the numerous copies made in engravings and paintings. Without a doubt, a special place among them goes to the painting from the Beyeler collection, a work signed by Rubens himself. The master’s specific approach to the very process of painting in the Ceres from the Beyeler collection is traceable with particular distinctness thanks to the nearly sketch-like manner of the execution. In comparison with it, the Hermitage painting seems more finished and complete in all its elements. Moreover, the statue of the goddess in the version from the private collection reminds us more of a static stone sculpture because of its painstaking modeling. The figures of the cherubs here are nearly a repetition of the corresponding personages of the Hermitage Ceres, differing only in their complete nudity. The leaf of grape vine and drapery which partially cover the nudity of the cherubs on the painting belonging to the Hermitage appeared, in all likelihood, only in the very last stage of the painting’s creation. We see from X-ray studies that they were absent in the original version of the composition. When repeating his works, Rubens, as a rule, changed something in them, whether details of secondary importance or separate features in the appearance of the main personages. Researchers believe that the Ceres which now belongs to the Beyeler collection was made approximately in the years 1615 – 1617 and is more likely another version of the Hermitage painting by the artist than a simple duplication.

For the exhibition an illustrated scholarly catalogue has been issued by the publishing house Silvana Editoriale (Italy). It opens with introductory articles by the leading researcher of the State Hermitage’s Department of Western European Fine Art, doctor of art history Natalia Ivanovna Gritsai, and Professor Rolando Bellini.