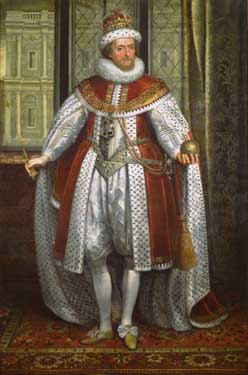 The Virginia Museum of Fine Arts will commemorate the 400th anniversary of Jamestown, the first permanent English settlement in the New World, with “Rule Britannia!,” a major exhibition of 16th- and 17th-century paintings mainly by Dutch and Flemish artists, whose core will be unprecedented loans from the collection of Queen Elizabeth II of Great Britain.

Another significant loan, which will introduce the exhibition, will be one of the finest portraits in existence today of Queen Elizabeth I, known to history as the virgin queen and in whose honor Virginia was named.

Called the Armada portrait, the painting is still in the hands of descendants of English naval hero Sir Francis Drake (1540?-1596) and has never before been exhibited in the United States. It was Drake who led Queen Elizabeth I’s fleet in defeat of the Spanish Armada in 1588, 19 years before Jamestown was settled.

The Armada portrait will introduce what Dr. Mitchell Merling calls “a significant group of grandiose portraits of British royalty, including some from the queen’s collection.” Merling is VMFA’s Paul Mellon Curator and Head of the Department of European Art. Among them will be portraits of King James I – in whose honor Jamestown was named – along with paintings of King Charles I and Catherine of Braganza, who was Queen Consort of King Charles II.

Seven masterpieces from the queen’s world-renowned collection of 17th-century Dutch seascapes will be on view. “All of them show events – departures, battles, races – in which the British royal family actually participated,” Merling says. Among them are paintings by artists including Johannes Lingelbach (1622-1674), Cornelis Vroom (1591-1661) and Willem van de Velde the Younger (1633-1707).

The exhibition takes its name from Britannia, a legendary British warrior-queen who held sway across the oceans, a symbol of Britain’s naval dominion. The country’s greatest naval conflicts occurred in the 1660s and, in response, King Charles II revived the use of the figure of Britannia. Her image was modeled on Frances Stuart, Duchess of Richmond, thought to be the greatest beauty of the Restoration Court. Her portrait and story will form an adjunct to the exhibition.

The royal paintings to be on view at VMFA customarily hang in a variety of the queen’s premier palaces, including Buckingham Palace, Windsor Castle and St James’s Palace. Some have never been publicly exhibited before. VMFA has agreed to contribute to the conservation costs of a number of these paintings. “They will be photographed in color for the first time, and our audience will be the first to see them in their full glory,” says Robin Nicholson, VMFA’s associate director for exhibitions. “We plan to publish a catalogue to accompany the exhibition as a significant contribution to the scholarship of 17th-century British art and patronage.”

The guest curator for “Rule Britannia!: Art, Royalty & Power in the Age of Jamestown” is Richard Ormond, former director of the National Maritime Museum in Greenwich, London. He has secured the loan of six additional paintings from the Maritime Museum that were either commissioned by, or belonged to, members of the royal amily. Nicholson says they include an outstanding series of nautical portraits by Sir Peter Lely (1618-1680) that were commissioned by James, Duke of York, to celebrate his victories as Lord High Admiral in the Dutch wars; one of the greatest of 17th-century ship portraits, Lely’s depiction of Charles I’s royal flagship; a dramatic marine painting by Abraham Storck (circa 1635-1710), showing the Duke of York’s flagship in the midst of battle; and two further Dutch paintings by Jan Wyck (1652-1700) and Van de Velde relating to the last sea-borne invasion of Britain in 1688.

Additional works on loan will enhance the themes of the exhibition. Among them will be a preparatory painting by Peter Paul Rubens (1577-1640) of the Duke of Buckingham as Admiral of the Fleet (from the Kimbell Art Museum in Fort Worth); a depiction by Sir Anthony van Dyck (1599-1641) of Queen Henrietta Maria (from the National Gallery in Washington, D.C.), which will hang beside a portrait of her husband, King Charles I (from the Royal Collection); and Lely’s majestic portrayal of King Charles II (from the collection of the Duke of Grafton).

The exhibition will be staged in the Great Hall at VMFA, which is itself an architectural homage to the 17th-century English country house. “It will be a colorful pageant of grand portraits and dramatic seascapes, many of which were particular favorites of the monarchs who commissioned them. The Great Hall will be transformed into a palatial interior, and the approaches to the museum and the exhibition will be decked with flags, banners and details from 17th-century royal ceremonials to create a sense of the museum en fête,” says Nicholson.